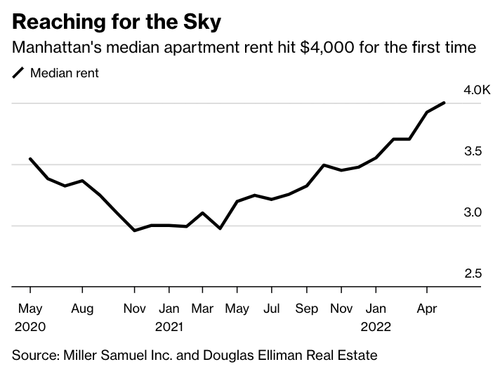 Manhattan apartment rents surged to a record high in May as spring demand remains robust and supply is ultra-tight. The baffling part about the strong demand is why people are flocking to a metro area experiencing an eruption in violent crime (remember what happened to the Goldman Sachs analyst?) and soaring living costs.

Bloomberg reports new data from appraiser Miller Samuel Inc. and brokerage Douglas Elliman Real Estate that shows Manhattan apartment rents touched an average of $4k per month, a 25% jump from a year ago.

Strong demand is apparently due to the real estate market’s busiest season (spring) as new college graduates find jobs and families make moves before fall when school begins. “Rents now have notched records in the past four months as New York came roaring back from the pandemic,” Bloomberg explains.

“Historically, new lease signings always peak in August, which increases the chances that the additional demand will push prices up further.

“In other words, tenants could see more price pain through the summer,” Jonathan Miller, president of Miller Samuel, said.

Manhattan’s vacancy rate was 12% a little more than a year ago and has since plunged to 2%. Supply is tight and is the reason why rents are at record highs. The lack of supply could push rent prices even higher by the end of summer (we noted last month: “Not A Peak” – Manhattan Apartment Rents Hit Another Record High).

Miller Samuel and Douglas Elliman said units listed last month spent just 52 days on the market, down from 68 in April and 107 a year earlier. Strong demand has enabled landlords to slash concessions. Only 15.3% of new leases in May had added perks, the lowest since September 2016.

Here’s the current situation on the ground:

$8k/month for that in NYC 😳. pic.twitter.com/y6ooEhKbeY

As people flock to the borough, an exodus of New Yorkers continues to accelerate. 21,546 New Yorkers left the state for Florida (where taxes, costs of living, and violent crime are low) in the first four months of the year.

In today’s age of remote or hybrid work, living in a violent city, and paying some of the highest living costs in the country, makes absolutely no sense. 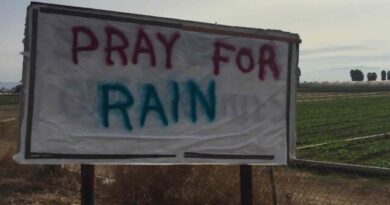 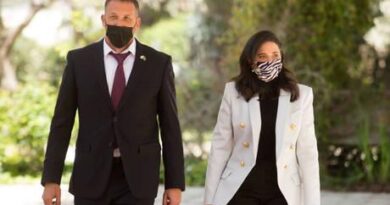