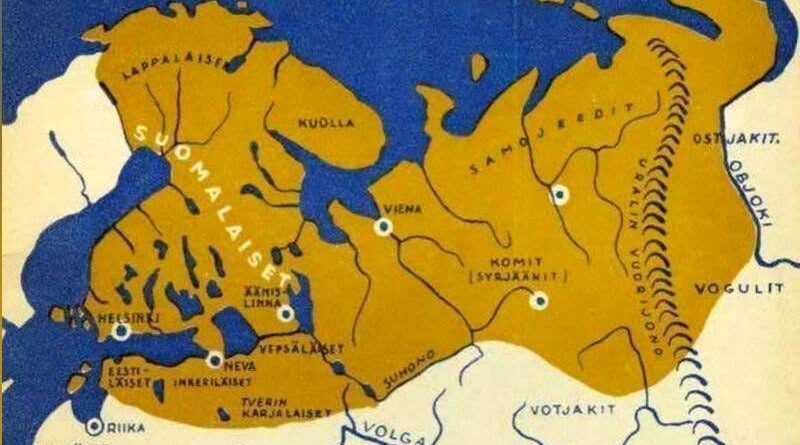 by Matthew Ehret, The Duran:

The decision recently expressed by the Finnish and Swedish governments to join NATO’s collective suicide pact shouldn’t come as a huge surprise to anyone who has been paying attention to the growth of Nazism over the past 77 years.

Not only is this growth taking the form of a renewal of swastika-tattooed, black sun of the occult loving, wolfsangel-wearing Azov, C14, Svoboda and Aidar neo-Nazis in Ukraine today, but a whole re-writing of WWII history which has taken an accelerated dive into unreality during the 30 years since the Soviet Union collapsed.

Across the spectrum of post Warsaw Pact members absorbed into NATO such as Lithuania, Estonia, Albania, Slovakia, and Latvia, Nazi collaborators of WWII have been glorified with statues, public plaques, monuments, and even schools, parks and streets named after Nazis. Celebrating Nazi collaborators while tearing down pro-Soviet monuments has nearly become a pre-condition for any nation wishing to join NATO.

In Estonia, which joined NATO in 2004, the defense ministry-funded Erna Society has celebrated the Nazi Erna Saboteur group that worked with the Waffen SS in WWII with the Erna advance Guard being raised to official national heroes. In Albania, Prime Minister Edi Rama rehabilitated Nazi collaborator Midhat Frasheri, who deported thousands of Kosovo Jews to death camps.

In Lithuania, the pro-Nazi Lithuanian Activist Front leader Juozas Lukša who carried out atrocities in Kaunas was honored as a national hero by an act of Parliament which passed a resolution dubbing “the year 2021 as the year of Juozas Luksa-Daumantas”. In Slovakia, the ‘Our Slovakia Peoples Party’ led by neo-Nazi Marián Kotleba moved from the fringe to mainstream wining 10% of parliamentary seats in 2019.

Not only did both nations play aggressive roles in the war against the Soviet Union during Operation Barbarossa and beyond, but both nations also provided vast loans and other economic support from 1940 until 1945.

On a purely military level, “neutral” Sweden led by King Gustav V and Social Democrat Prime Minister Per Albin Hannson ensured that their territories were made available to the Nazis during the Battle of Narvik in 1940 that resulted in the fall of Norway. When Operation Barbarossa was launched a year later, Germany was permitted to use Swedish territory, rail and communication networks to invade the Soviet Union via Finland. German soldiers and battle equipment were carried from Oslo to Haparanda in Northern Sweden in preparation for assaults on Russia.

On the economic front, 37% of Swedish exports throughout the war went to Germany which included 10 million tons of iron ore per year, as well as the largest production of ball bearings vital for the Nazi war machine which were exported via harbors in Nazi-occupied Norway. The pro-fascist von Rosen family played one of the most instrumental roles in promoting Nazi ideology in Sweden with Eric von Rosen co-founding the National Socialist Party of Sweden and providing access to the upper crust of Swedish nobility to the German high command during the 1920s-1930s.

Additionally, Count Hugo von Rosen acted as director of the U.S. branch of the Swedish Enskilda Bank and SKF Bearing which managed the flow of funds and ball bearings (made in Philadelphia) to the Wehrmacht throughout the war.

Historian Douglas Macdonald wrote: “SKF’s ball bearings were absolutely essential to the Nazis. The Luftwaffe could not fly without ball bearings, and tanks and armored cars could not roll without them. Nazi guns, bombsights, generators and engines, ventilating systems, U-boats, railroads, mining machinery and communications devices could not work without ball bearings. In fact, the Nazis could not have fought the Second World War if Wallenberg’s SKF had not supplied them with all the ball bearings that they needed”.

Hugo was Goering’s second cousin by marriage and his cousin Eric will play an important role in this story shortly.

Unlike Sweden, Finland never tried to feign neutrality, and in that sense can at least be applauded for avoiding the hypocrisy of their Swedish cousins. Sharing a 1340 km border with Russia which includes an area within 40 km of striking distance from today’s St Petersburg, Finland was a high value piece of real estate for the Nazis.

During the war, 8000 Finnish soldiers fought directly alongside the Nazis against the Russians, with many serving in Nazi SS Panzer divisions between 1941-1943. A scandalous 248 page report published by the Finnish government in 2019 revealed that no less than 1408 Finnish volunteers served directly in SS Panzer division carrying out mass atrocities including the extermination of Jews and other war crimes.

The cause of Finland’s alliance with the Nazis during the war is also much darker than sanitized history books let on.

Soviet leaders had been watching the buildup of the Nazi war machine heading towards Russia like a slow-motion train collision from the moment the 1938 Munich Agreement was reached that saw the destruction of Czechoslovakia and the growth of a Frankenstein Monster in the heart of Europe.

In his brilliant ‘The Shocking Truth About the 1938 Munich Agreement’, Alex Krainer demonstrates that British secret diplomacy ensured that from Hitler’s takeover of Austria to the invasion of Poland in September 1939, Britain’s appeasement policy merely feigned opposition to Nazism while actually facilitating its unrelenting growth as a Frankenstein monster in the heart of Europe.

Knowing that an assault was inevitable, Russia signed the Molotov-Ribbentrop Pact in August 1939 to bide time while attempting to establish a buffer zone between the expansionist Nazi regime and herself.

During this small window, a race was on to consolidate spheres of interest with Russia acting defensively to secure her soft underbelly before the inevitable hot war was launched. Germany meanwhile raced to bring on the heat with military operations that spread the Reich across Europe.

In the aborted Russia-Finnish Mutual Security Treaty, Russia offered to cede South Karelia in the north in exchange for the Soviet border moving westward on the Karelian Isthmus and permission to station Russian bases in Finland. The pro-German government of Ryti and Mannerheim had publicly been cozying up to the Germans during the 1930s and much of Finland’s aristocracy had entertained delusional visions of expansionism along with their Swedish pro-Nazi counterparts believing that a major part of northwestern Russia called East Karelia apparently contained a “pure” Nordic people untainted by both Slavic and Scandinavian blood.

The Roar of US, Western, MSM Silence

AMERICA VS. RUSSIA – NOT LOOKING GOOD!