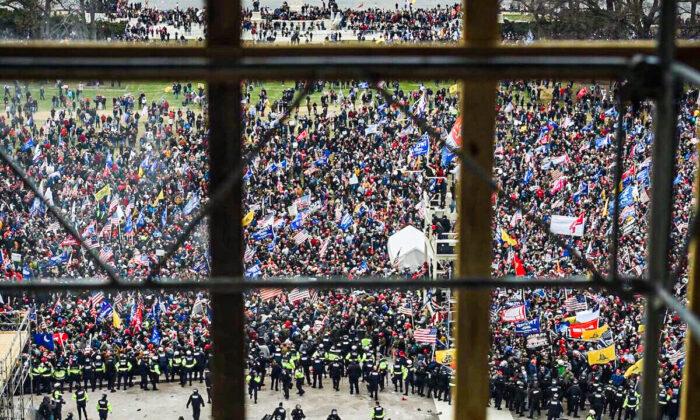 Police and protesters outside the U.S. Capitol’s Rotunda in Washington on Jan. 6, 2021. (Olivier Douliery/AFP via Getty Images)

DEFENDING AMERICA‘Tonight, they’re going to scream their lie loudly and often with much Hollywood drama. They hope you will buy it as truth. Do not be deceived.’

Ahead of the first of six televised House committee hearings related to the protests that took place at the U.S. Capitol in Washington, D.C. on Jan. 6, 2021, a Jan. 6 prisoner has issued a warning to the American people regarding the “farce” they are about to witness.

On the evening of June 8, The Epoch Times received an audio recording from Jeremy Brown, which he addresses to the American people. The transcript of the recording can be found here.

“I am coming to you today on the 253rd day of my illegal, unconstitutional imprisonment to advise and warn the American people that what you are about to see is part of this compromised government’s well-orchestrated, highly-produced lie, meant to target the minds and perception of the uninformed and misinformed masses with the intent to demonize and dehumanize their opposition,” Brown begins.

He also advises that “their opponents are anyone who disagrees or even asks questions about their false authority and their anti-American and anti-liberty agenda.” He says “their goal is to take down America and ‘Build Back Better’ in a form suitable to their authoritarian utopia dreamland, also known as the Great Reset.”

Brown is a 20-year United States Special Services Master Sergeant and combat veteran. Brown is also a candidate for the Florida House of Representatives, District 62. As a self-described “January 6 political prisoner of war,” Brown is currently being held in the Pinellas County Jail in Clearwater, Florida, where he is awaiting trial for two misdemeanor charges related to the Jan. 6, 2021 protest in Washington: entering and remaining in a restricted building or grounds and disorderly and disruptive conduct in a restricted building or grounds. The publicly available photo included in the FBI complaint against Jeremy Brown, who is shown here dressed in tactical gear in Washington on Jan. 5, 2021, the day before the Jan. 6 “Stop the Steal” rally. (U.S. Department of Corrections)

However, Brown contends he is being held, not because of what the government claims he did, but because the FBI and Department of Justice are aware that he knows “the truth” about what they did. In an alleged effort to keep him from exposing that truth, they have denied him access to any evidence in his case for over eight months. He also reminds Americans that the FBI’s Joint Terrorism Task Force already attempted to recruit him “to be part of their fraud.”

“But I turned them down,” he said, noting that he even recorded the encounter in order to expose them, and it was after that recording got out that they had him arrested “and planted evidence” in order to keep him incarcerated.

In an open letter titled, ‘”Don’t Do Nothing,” exposed in an exclusive story by The Epoch Times on April 13, Brown outlined how the government is trying to take control over the American people through intimidation and fear and to silence those who dare to take a stand. The entire letter is available here. The actual recording of the agents attempting to recruit Brown is available at the Gateway Pundit and at JeremyBrownDefense.com.

“They’ve had me locked away for 253 days in hopes of shutting me up,” Brown insisted, saying that will never happen “because they are sloppy.”

He predicts he will soon be free. But after that, “they will manufacture a new reason” to put him back in jail or to silence him “in other ways.”

“But even in death,” he vowed, “I have a plan to expose the truth.”

“Just look round,” Brown challenged, noting how “bodies of unelected, global elites like the World Economic Forum, the World Health Organization, the United Nations, and many others” are simultaneously and systematically destroying every aspect of what has made America “the most free and powerful nation on earth.”

“Their goal is to convince us that we are global citizens, not Americans,” Brown said, suggesting they are using a strategy of chaos in an effort to divide Americans by race, gender, medical mandates, the education of America’s children, “and even the weather” in order to turn them against each other.

“They need us to blame each other so we don’t blame and hold them accountable,” He asserted, adding that “their gloves are off and they’ve crossed the Rubicon.”

“Their fake cultural revolution has been building for decades,” Brown said, with the caveat that it is now “out in the open for all to see and that those who seek to rule over [Americans] must seize total control before [Americans] recognize what is going on.

“But will you recognize it?” he asks rhetorically, and he dares Americans to look at the condition of their country, at what is going on with their children, in their workplace, in their communities, and in their culture. He challenges them to look at the empty supermarket shelves, the cost of gas, and the evaporation of their life’s savings. “Do you see it?” he asks, inquiring further that with all of the current problems, why are gun control and domestic terrorism “the D.C. topics of the day?”

“At a time when violent crime and property crime are skyrocketing faster than inflation and gas prices, your government wants you disarmed,” he noted.

In the wake of the tragedy in Uvalde, Texas, House Democrats passed the FY2022 National Defense Authorization Act to enact Red flag laws, which will ultimately enable the government, through law enforcement and the courts, to target law-abiding gun owners by stripping away their Second Amendment rights based on allegations that lack due process, reasonable suspicion, and probable cause.

Brown further notes that while the government is using American tax dollars to arm Ukraine, they are actively seeking to take away guns from the American people. Why?

“Think about this statement,” Brown challenged. “When politicians want to take away your guns, that is exactly when you need your guns, and the Founding Fathers knew and lived through this. These criminals know the people are waking up to their corruption and when the lights come on they’ll be the rats and roaches running to hide. What you’re going to see tonight is their attempt to fortify their false narrative and they hope to see this as their final justification to pass laws making all of us domestic terrorists.”

After the National School Board Association sent a now-scrubbed letter (pdf) to President Joe Biden asking him to label parents who showed up to school board meetings to express their anger over mask mandates and critical race theory as a form of “domestic terrorism” and to use the Patriot Act against them, an Oct. 4, 2021 memorandum from United States Attorney General Merrick Garland to the FBI says the bureau was using a “threat tag” system to track and access those “threats” and that “the Department will announce a series of measures designed to address the rise in criminal conduct directed toward school personnel.”

“Tonight, they’re going to scream their lie loudly and often with much Hollywood drama,” Brown predicted. “They hope you will buy it as truth. Do not be deceived.”

He said the American people must watch the investigative hearings and realize that what they are watching “is a farce.”

Stewart Rhodes, the founder of Oath Keepers, also recorded a message to the American people, which was also obtained by The Epoch Times. The transcript of the recording can be found here. Rhodes, charged with seditious conspiracy and “other charges,” is being held in a jail in Virginia. Like many other Jan. 6 defendants, Rhodes is being held without a trial. Rhodes also contends the hearings are nothing more than “a war against the entire MAGA movement” and an effort to destroy it. He said they are using the manufactured narrative created by “someone who rolled over and agreed to test a lie, to falsely testify, bear false witness” and they are trying to use “this grand lie” that Jan. 6 was a “planned conspiracy” in order to “stick that to President Trump” and to destroy “the two groups they hate the most, the Oath Keepers and everyone who is part of the MAGA movement.

Brown tells the American people to learn his story. Then compare his account of what happened on Jan. 6 “to what you hear and see from the politicians that are responsible for most of the problems in this country and lie to your face for a living.”

“Judge for yourself what rings true to you,” he said, adding that he isn’t running for office from jail “to win.” He’s “running to warn.”

“Tonight, gather your family and friends and watch what is going on,” he admonished, advising them to “watch with a discerning eye and listen closely to their words.”

Ask yourself tough questions and then seek the truth on your own. Once you find the truth, don’t do nothing because today America needs us to be Americans. Today, it’s time for patriots not politicians, warriors not wimps, leaders not leaches, champions not cowards. It is time for winter soldiers to defend our republic, not sunshine patriots who profit from its destruction. Evil tells you who they are and we must believe them. My name is Jeremy Brown, inmate 1875858, and this is my warning to America.

“God bless your families and the truth seekers,” Brown concluded. “May God hear our prayers and cries for liberty and justice to be restored. De oppresso liber. Liberty or death.”

Joe Hanneman and Joseph Lord contributed to this report. 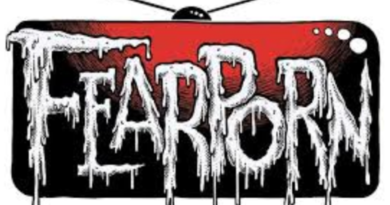 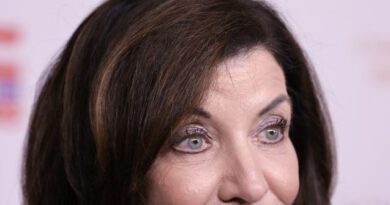