Russia’s SMO in Ukraine is proceeding as planned —with great care by its forces to strike only military related targets.

According to Russia’s Foreign Ministry spokeswoman Maria Zakharova (MZ below):

“Peace (and restoration of essential infrastructure are) returning to more cities and villages freed from Ukrainian neo-Nazis and foreign mercenaries.”

They include daily shelling of Donbass residential areas to kill civilians and destroy essential infrastructure.

As orchestrated and directed by the Pentagon and CIA handlers, Ukrainian Nazis set up firing positions in residential neighborhoods, including homes and schools — while taking cover behind civilians held as human shields.

“Investigative agencies from both Russia and the Donbass republics report all these war crimes and are recording them,” MZ explained, adding:

“They will be investigated in order to hold the perpetrators accountable.”

The Zelensky puppet regime continues to recruit foreign mercenaries to fill the ranks of its degraded units.

“By early June, there was a two-fold decrease in the(ir) numbers.”

“Some of them were killed, while others changed their minds and returned home, or were taken prisoner.”

Ukraine is ground zero for these extremists to converge, their presence making the restoration of peace take longer.

US and UK private military contractors are also involved in the business of recruiting hardcore elements to kill Russians.

The UN, OSCE, ICRC, Council of Europe and European parliaments are complicit with what’s going on by their conspiracy of silence instead of condemning made-in-the-USA proxy aggression against Russia and Donbass.

On what relates to crimes against humanity and other breaches of international law, the US-dominated West wholeheartedly supports what demands condemnation.

A big unknown is how many heavy and other weapons supplied to Ukraine by US/Western regimes are sold to criminal gangs on the black market.

Interpol and independent experts warned about the threat that these transactions pose.

Yet US/Western regime regimes turn a blind eye and deaf ear to the menacing situation, ignoring evidence of killing, theft and other criminality with weapons supplied to Ukraine.

They fabricated claims about Russia’s intent to “target Ukrainian chemical facilities (sic)” — despite no evidence suggesting it.

At the same time, more made-in-the-USA/Kiev implemented false flags are planned to again wrongfully blame Russia for what its forces will have nothing to do with.

In going up against Russian military superiority, the only thing going for hegemon USA-dominated NATO and Ukraine is more effective infowar than reality checks by Moscow, its ministries and media.

Since Russia’s SMO began on Feb. 24, tens of thousands of Ukrainian forces have been killed or wounded.

A generation of Ukrainian youths is being lost by using them as expendable cannon fodder.

Once again, the US-installed puppet masquerading as Ukraine’s president, Zelensky, sounded delusional by claiming that “we will prevail (sic).”

As discussed in a same-day article, Western support for endless proxy war on Russia may be waning.

On Sunday, Al Jazeera reported that as Russian forces continue to relentlessly batter and degrade Kiev’s military, “waning interest among Western powers might lead to (seeking) a settlement.”

Without US/Western support, the regime’s military would already have collapsed, adding:

It’s “obvious” that Russia is prevailing, that nothing the West or Kiev can do will reverse their lost cause.

Western regimes are “gradually begin(ing) to change their militant rhetoric to a more accommodating one,” given reality on the ground.

EU bloc cracks replaced unity on all things Russia and Ukraine, including on sanctions war.

According to analyst Matteo Villa:

“(F)atigue is setting in among (EU) member states on finding new ways to sanction Russia, and clearly there are some countries that are less and less willing to go on with sanctions.’’

Italian right-wing leader, Matteo Salvini, minced no words saying that “if the war goes on it will be a disaster.”

“The Kiev regime and those that stand behind it get their ideas from world history: Nazism and fascism,” adding:

“(W)ar crimes and atrocities committed by Ukrainian (Nazis), the unbridled militarization of the Kiev regime, and other facts we exposed during the (SMO) prove that the protection of the Donetsk and Lugansk People’s Republics and demilitarization and de-Nazification of Ukraine are imperative goals and tasks.”

There’s no ambiguity about how Nazi-infested Kiev and its US/Western paymasters operate.

Thousands of Ukrainian forces “not only have hands covered with blood, but also have Nazi tattoos, including swastikas,” on their bodies and uniforms.

Russia’s SMO goals “will be achieved.”

Peace and stability will be restored “in the region, and to Europe as a whole,” MZ stressed. 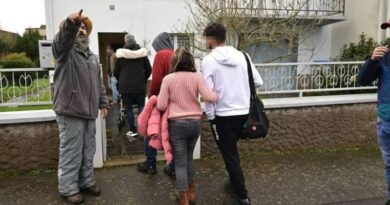 JIMMY KIMMEL ADMITS HE LOST HALF HIS AUDIENCE ATTACKING TRUMP