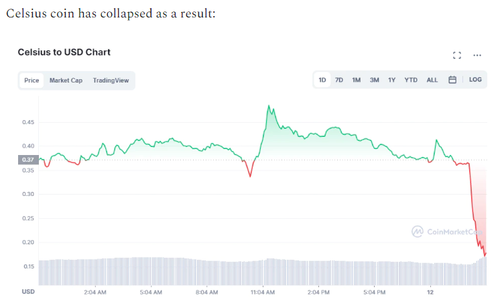 Most people know I have been extremely critical of Celsius CEO Alex Mashinsky, ever since he participated in a “Gold vs. Crypto” debate with Peter Schiff where he rattled off one alarming statement after the next.

Tonight, it looks as though Celsius has delivered the ultimate piece of bad news for its clients – that they can no longer withdrawal their funds.

Celsius wrote this evening in a “Memo to the Celsius Community”:

Due to extreme market conditions, today we are announcing that Celsius is pausing all withdrawals, Swap, and transfers between accounts. We are taking this action today to put Celsius in a better position to honor, over time, its withdrawal obligations.

Acting in the interest of our community is our top priority. In service of that commitment and to adhere to our risk management framework, we have activated a clause in our Terms of Use that will allow for this process to take place. Celsius has valuable assets and we are working diligently to meet our obligations.

The company said it is taking the action to “stabilize liquidity and operations”:

We are taking this necessary action for the benefit of our entire community in order to stabilize liquidity and operations while we take steps to preserve and protect assets. Furthermore, customers will continue to accrue rewards during the pause in line with our commitment to our customers.

We understand that this news is difficult, but we believe that our decision to pause withdrawals, Swap, and transfers between accounts is the most responsible action we can take to protect our community. We are working with a singular focus: to protect and preserve assets to meet our obligations to customers. Our ultimate objective is stabilizing liquidity and restoring withdrawals, Swap, and transfers between accounts as quickly as possible. There is a lot of work ahead as we consider various options, this process will take time, and there may be delays.

Just days ago, I was on with Palisades Gold Radio last week and reiterated my skepticism of Mashinsky and these types of crypto claims:

“There is shady shit going on in the world crypto. There are Ponzi schemes on top of Ponzi schemes on top of Ponzi schemes. And you don’t need to know dick about crypto – all you need to understand is you have several entities willing to pay people yield on their crypto assets that they deposit. Then you have to understand crypto doesn’t inherently generate a yield. There are some very big, huge, massive air pockets in the world of crypto.”

“Until I see someone like Alex Mashinky, who has made in my opinion a number of very irresponsible claims and gold; until a guy like that and his company get a comeuppance I’m not interested in looking at the crypto space.”

And again, it was just about six months ago when I wrote an article about some of the absolutely batshit insane statements made by Mashinsky while debating Peter Schiff on the merits of crypto versus gold.

That article was called “Bitcoin: One Hubris-Laden Interview Closer To A Day Of Reckoning” and it wasn’t even a piece I intended on writing.

It was only after I listened to Mashinsky’s “arguments” for crypto during the debate that I felt the need to write it; mainly because I was seriously alarmed by the ease with which Mashinsky appeared to be spreading what I believed to be harmful information to the most susceptible, unsophisticated potential investors.

From my November 2021 criticism of Mashinsky:

Mashinsky led the debate by suggesting a classic fallacy: that bitcoin’s past performance was going to always be indicative of its future results. This is akin to betting “black” at the roulette table after “red” comes out fifty times in a row because it is “due” to come out when, in fact, “black” still has the same 50% chance of coming out as it did on all of the prior spins.

I gave kudos to the Kitco moderator for trying to put a stop to this argument before it started, but this is always the first arrow in the quiver for bitcoin bulls. I have pointed out over and over, there is a reason that the first disclaimer you always see when buying a financial product is: “past performance is not indicative of future results.”

Mashinsky then continues hopping from one logical fallacy and inaccuracy to the next. During a discussion about whether or not all bitcoin margin debt (key word: all) was liquidated during the last bitcoin crash, Peter Schiff points out that the amount of leverage people are using to buy bitcoin is likely still significant and dangerous. Mashinsky argues that he believes all margin debt had been liquidated during the last bitcoin plunge, a ridiculous assertion that had Peter fuming.

The absolute worst and most irresponsible of all of the arguments from Mashinsky came when he suggested to viewers of the debate – many of whom likely lack financial sophistication – that both bitcoin and gold pay a yield.

Of course, what he meant was that they pay a yield on his Celsius platform, but he failed to qualify his statements to make that clear. Neither asset pays a yield in general and Mashinsky knows that.

Days ago, Mashinky blamed short sellers for the plunge in Celsius, which should have been the tell:

“This is not a coincidence. This is somebody who decided, ‘You know what? I’m going to take down all of Celsius,’” he said during the event. 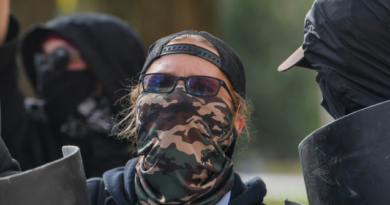