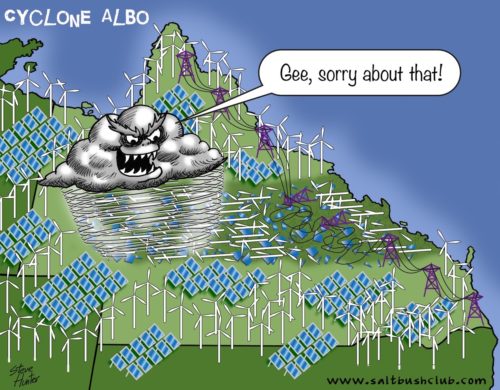 They promise (with a straight face) that Australia’s electricity will be 82% renewable by 2030. They predict a 43% reduction in emissions and are “on track for net-zero by 2050.”

They threaten to litter the landscape with 400 community batteries, 85 solar banks, and a $20B expansion of the electricity grid. [bold, links added]

This gigantic “green” electricity plan will need at least 150 million Chinese solar panels covering outback kingdoms of the land, plus thousands of bird-slicing metal-hungry wind turbines, plus never-ending roads and power lines – not friendly to grass or trees and with no room for native birds, bees, bats or marsupials – not green at all.

See our sterile future being constructed.

The whirling triffids are also invading our coastal seas. Seabirds are advised to migrate.

The ALP has also revived the hoary plan to run an extension cord to Tasmania. Naturally, some greedy green Tasmanians want to keep all that wind, solar and hydro energy for themselves. Others dream of sending NT sunshine up a long cable from Darwin to Singapore.

With enthusiastic support from the new Parliament full of Climatistas, Net Zeros, Teals, and Greens (but very few engineers), we can expect a disorderly rush to plaster a mess of electrical machinery and appliances all over the face of Australia.

When there is no sun on a single solar panel for 12 hours, no one notices; when all wind turbines sit idle for days under a slow-moving winter high, no one cares; but when one aging, under-maintained coal plant falters, we notice; when three coal generators fail, we have a power crisis.

Yet we have green millionaires urging quicker closure of our few remaining 24/7 coal-powered generators.

Eastern Australia recently had several very windy days, which caused many blackouts as trees and powerlines were blown down.

Imagine the outages and repair costs when a cyclone slices thru this continent-wide spiderweb of fragile power lines connecting millions of wind/solar generators, fire-prone batteries, and diverse markets.

Picture the green energy network after the next big flood or bushfire.

Europeans can pretend to run a modern society with intermittent energy from windmills and sunbeams because they have lifelines to reliable energy from French nuclear, Scandinavian hydro, Polish and German coal, Iceland geothermal, North Sea natural gas, and (sometimes) Russian gas, oil, and coal.

Australia has no extension cord to neighbors with reliable energy – we are on our own.

We can have renewable energy or reliable energy, but not both.

Viv Forbes has technical and financial qualifications and experience. He has solar panels on his roof, but no vested interests in coal, oil, or gas apart from diesel farm equipment and a diesel generator in the shed. 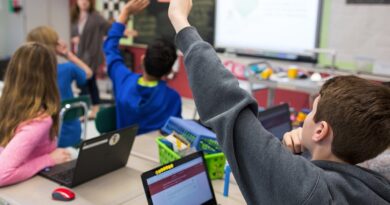 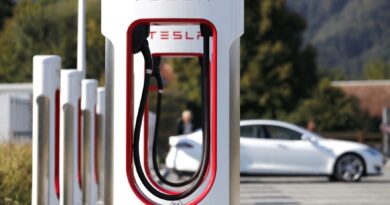