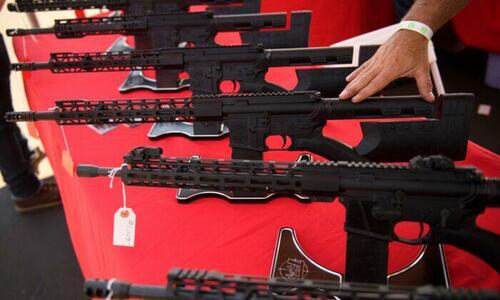 The National Rifle Association (NRA) and Gun Owners of America (GOA) both issued statements Sunday after a bipartisan group of senators announced they’d reached an agreement on a gun control and safety package.

“Here we go again, Republican legislators compromising your rights and getting nothing in return,” GOA wrote in a Twitter post, referring to proposals in the framework deal.

“Federal dollars to bribe your state legislators into enacting unconstitutional ‘red flag’ laws, which could allow a court to seize your weapons, without any due process, simply based on anonymous tips.”

It added that the bill would entail “wait periods and extensive review for those under 21 seeking to exercise their Second Amendment rights … we will not allow the government to make those who can vote and fight our wars second class citizens.”

The proposal, which has the backing of 10 Republicans in the Senate, includes initiatives to support state crisis intervention orders, an enhanced review process for gun buyers under the age of 21, expansions on various mental health programs, a ban on straw purchases, and other measures.

Notably, the framework bill includes a red flag provision giving “resources to states and tribes to create and administer laws that help ensure deadly weapons are kept out of the hands of individuals whom a court has determined to be a significant danger to themselves or others,” according to a news release from the senators on Sunday.

The NRA, meanwhile, said that it is “committed to real solutions to help stop violence in our communities. We encourage our elected officials to provide more resources to secure our schools, fix to our severely broken mental health system and support law enforcement,” according to a statement released to Fox News.

“As is our policy, the NRA does not take positions on ‘frameworks’. We will make our position known when the full text of the bill is available for review,” the NRA added.

But overall, the group will “continue to oppose any effort to insert gun control policies, initiatives that override constitutional due process protections and efforts to deprive law-abiding citizens of their fundamental right to protect themselves and their loved ones into this or any other legislation,” the statement continued.

“Today, we are announcing a commonsense, bipartisan proposal to protect America’s children, keep our schools safe, and reduce the threat of violence across our country,” 20 senators said in a news release on Sunday. “Families are scared, and it is our duty to come together and get something done that will help restore their sense of safety and security in their communities.”

The measure does not include more controversial gun control measures pushed by Democrats such as bans on semiautomatic rifles or magazines that hold 10 rounds or more, or raising the age to purchase certain firearms like AR-15-style rifles from 18 to 21.

“Today’s announcement of a bipartisan gun-safety framework is a good first step to ending the persistent inaction to the gun violence epidemic that has plagued our country and terrorized our children for far too long,” Schumer said in a statement. “Once the text of this agreement is finalized, I will put this bill on the floor as soon as possible so that the Senate can act quickly to advance gun-safety legislation.”