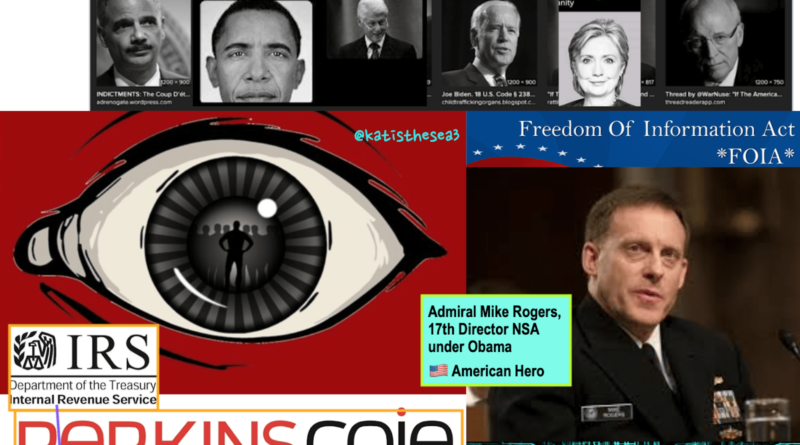 In 2012 I advised a number of hosts & media people
they were on a list.
I knew EXACTLY where the node was.. cuz I was on the list..
They were targetting whistleblowers
related to Benghazi..
[During Sussmann trial]
it came out..
that Perkins Coie had one of the nodes..
They were ‘allowed’ to be there for ‘research’ purposes
in reality they were doing ‘Political’ research
to find out who the whistleblowers were
to go & attack..
Perkins Coie.. was running tens & tens of thousands..
ON WHAT BASIS DOES A PRIVATE LAW FIRM
GET THE ABILITY TO GO INTO NSA COMPUTERS
& LOOK AT ANY AMERICAN CITIZEN THEY WANT TO?
They WERE doing it through the IRS
& had to shut it down..
cuz Eric Holder & crew were getting caught..
SO THEY BYPASS EVERY RULE IN THE BOOK
& ALLOW PRIVATE CITIZENS TO BE MONITORED
through a node in a law firm..
& it won’t EVER show up on a FOIA.
THIS was the information Admiral Rogers
became aware of
& then shut the whole thing down

Imagine if [White Hats] PUTIN & Bin Salman
are the masterminds behind BITCOIN?
& Deep state doesn’t want this truth coming out
because over a decade they were tricked
into investing Worldwide into crypto..

6-12-22 t.me/qthestormrider777
>) BEHIND THE SCENES FBI BECOME >INFORMANTS<
The purging of the FBI that won’t consent
to DEEP STATE structure
& Democratic influence & agendas .. Are

It’s ALL connected to [DECLAS]

Kash Patel calls out the FBI’s involvement in January 6th:
“What were they doing allowing undercover informants
& FBI agents to be there in plain clothes?
Why hasn’t the American public received those answers?
Why haven’t we seen all the footage?”

The Takeover Of America’s Legal System

Not Enough Signs Of A Major Market Bottom