Still way too much wild craziness, including the ultimate bag-holder gamble: Why the bottom isn’t anywhere near.

I went out looking for blood in the streets Friday evening after the sell-off to see if markets had hit bottom, but there wasn’t any blood. There was instead chatter about the next rally, about what to buy and when. And there was the relentlessly exuberant pump-and-dump meme-stock crowd hoopla-ing DVD rental company Redbox Entertainment, one of the infamous SPACs, and video-streaming service Chicken Soup for the Soul Entertainment, which is going to acquire Redbox, in an utterly ridiculous crazy-wild game with a deadline (we’ll get there in a moment).

That this game is even played – that this utter nuttiness in the markets continues – indicates that there is still way too much exuberance, way too much liquidity, way too much craziness. And the bottom isn’t in until this kind of craziness is snuffed out.

It took 12 years of money printing and interest rate repression to inflate this Everything Bubble, and it’s going to take years to unwind it.

But markets are making some progress.

Even Exxon, which soared along with other energy stocks for months, fell 1.9% for the day, the second day in a row of declines.

Initial bloodletting among the tech and social media giants.

Microsoft fell 4.5% for the day and 7.0% for the week, to its 52-week closing low, matching its May 20 close, and is waiting for further instructions on Monday.

Amazon, despite the 20-for-1 stock split and the large-scale financial engineering project of buying back $10 billion of its shares with borrowed money, fell 5.6% on Friday, and 12.5% for the week, but remained a tad above its two-year low of May 24.

Meta, which is betting its virtual farm on the metaverse and has ditched “Facebook” from everything it can, including in its name and stock ticker, fell 4.6% for the day and 9.5% for the week, and is down 54% from its high, and at $175.57 is right back where it had been in December 2017.

Tesla dropped 3.1% on Friday and 5% for the week, and is down 44% from its November high. Friday evening, it said that it would split its stock 3-for-1, and given the damage that Amazon has suffered since its stock-split announcement, this one is going to be interesting.

That’s another sign: As long as these stock splits are still going on, the market is far from having hit the bottom.

Among the other standouts is Intel, which dropped below $40 on Friday, its lowest closing price since October 2017.

Everything Bubble began deflating in February 2021, it was just hard to see.

But the IPO and SPAC stocks, and assorted other stocks, that had been the biggest and most ridiculous highfliers – and the funds and indices that track them – started deflating in February 2021, with many stocks cratering 70%, 80% and over 90% in a matter of weeks and months, so that by March 2021, I mused, Was That the IPO Stocks Bubble that Just Popped? And it was. And I started collecting stories for my Imploded Stocks column.

The Ark Innovations ETF [ARKK] is another indicator of when markets might approach the bottom, and we’re far from it.

Despite the losses, there are still many fervent believers in Cathie Wood and the miracles she’s going to perform with these highfliers that she thinks are offering ‘‘disruptive innovation’’ that “potentially changes the way the world works.” And as long as her funds are still kicking and are still attracting new money, we’re far from the bottom (data via YCharts): 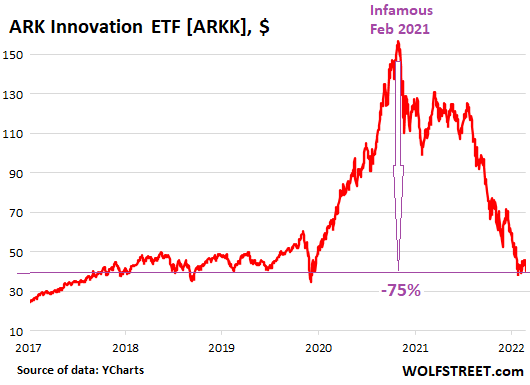 And there will be huge rallies, and they will draw in more money, and it’s not until all this money has gotten incinerated, that we’re getting close to the bottom. 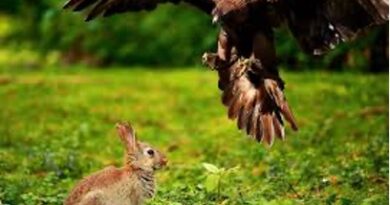 Are You Easy Prey?