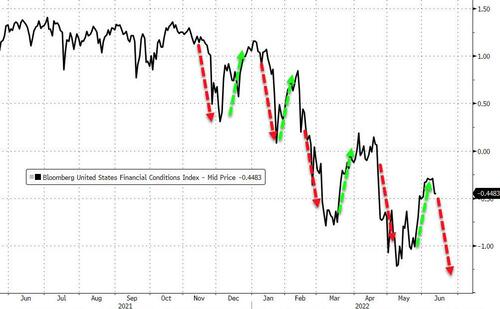 The fecal matter is striking the rotating object this morning and Nomura’s Charlie McElligott is worried.

This past Friday’s blistering US CPI upside shocker, alongside the horrific outputs on U Mich -Sentiment and -Inflation Expectations, crystalized the “worst fears confirmed” of a market which simply has nowhere left to hide except for USD and Long Vol, as even Commods are “giving back” today, on repricing of the Central Bank “FCI tightening left tail”…

As if you needed reminding, inflation printed a new four-decade high, with surprises in both Core MoM and YoY, which meant calamity for a market that was attempting to willfully shift the narrative to “peak inflation” denouement and was looking for a “light at the end of the tunnel”.

And “insult to injury” here too was the U Mich data, which seemingly confirmed a shock “stagflation” impulse, as the inflation input (versus wages unable to “keep up”) saw the headline consumer “Sentiment” component collapse to a record low (50.2 vs 58.1 est), while both the 1Y- and 5-10Y- Inflation Expectations forecasts moved higher and are looking increasingly “unanchored”.

Now, it becomes clear that said “light at the end of the tunnel” was actually an oncoming train, in the form of a Fed now forced to capitulate into an even more aggressive policy stance in a desparate race again said unanchoring of inflation expectations and “…requiring a more forceful response from the Fed to dislodge it” (Nomura Econ) – hence a monstrous two-day “bear-flattening” in curves as hikes are added-back to the front-end, while “hard landing” sees long-end relative outperformance.

Recall, after risk-assets celebrated Powell’s prior May press conference where he appeared to “rule out” a 75bps hike – he later clarified in a MarketWatch interview on May 12th that it remains an option:

“I said we weren’t actively considering that. But I said what we were actively considering, and this is just a factual recitation of what happened at the meeting, was a 50-basis point increase… But I would just say, we have a series of expectations about the economy. If things come in better than we expect, then we’re prepared to do less. If they come in worse than when we expect, then we’re prepared to do more.”

And, just to complete the perfect storm, all of this happening into Fed and Quarterly VIXperation (Wed) / Options Expiration (Fri) this week.

What’s also interesting about this is that the lower equity prices go pre-FOMC the more hawkish the Fed has to be to spark a sustained selloff. In other words, lower stock prices are already a reflection of higher rates and so the Fed has to exceed these new, elevated rate expectations to spark another equity leg lower.

The net summary is this: We believe that options expiration will invoke a rally, but the timing of this is path dependent. Should the FOMC be perceived as “mild” then the put rally fuel could be drawn into Thursday & Friday. Should the Fed spark further selling into Friday, then we would look for a Monday short term low to be put in for markets, with a rally early next week.

Ultimately this expiration is clearing out a lot of equity put protection, which clears the way for lower-lows in the weeks ahead.

The Nomura strategist sums it all up with one simple hashtag: #yikesyikesyikes