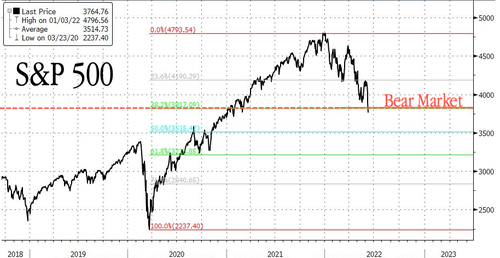 The plunge in the stock market is on mounting risks facing corporate earnings and a Federal Reserve that may have to pivot towards super hawk to combat the highest inflation in four decades. But let’s forget the souring macro backdrop because stocks could face even more downward pressure as a far more ominous development has emerged: A stock buyback blackout begins on Tuesday.

As Rubner wrote, “corporates have been the largest buyer of US equities so far this year ($1.3T in authorizations).” Really this isn’t what bulls and those who’ve been attempting to ‘buy the dip’ want to hear as the S&P 500 tumbles into a bear market.

An index that measures S&P 500 companies buying back their stock has sunk to the lowest levels since early 2020.

The blackout is ahead of the upcoming official Q2 earnings launch; the lack of indiscriminate stock buying (by corporations) could impact liquidity at a critical juncture for stocks.

None of this is a surprise and BlackRock strategists, led by Wei Li, told clients Monday not to “buy the dip in stocks because valuations haven’t really improved, there’s a risk of Fed overtightening, and profit margin pressures are mounting.” The lack of buyers, corporate and retail, is a very troubling picture for stocks in the weeks ahead.

However, super bear Michael Wilson, chief US equity strategist at Morgan Stanley, who predicts the S&P 500 will fall to 3,400 before a more tradeable low is in, published a bullish note Monday, commenting that S&P 500 companies are expected to unleash the most massive stock repurchases ever this year, estimated around $850bln to $1tln.

Wilson wrote, “seasonality suggests buybacks are stronger in the back half of the year.”

Removing corporate buyers could suggest stocks have yet to reach a bottom, though when the repurchasing window reopens on July 22, that could signal a firmer floor in markets. As for now, the lack of liquidity is a major risk in stocks.

PwC And KPMG Cut Business Ties To Russia And Belarus 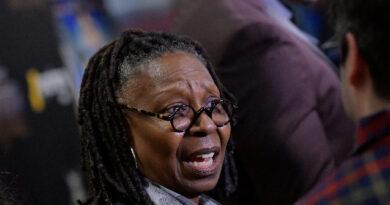