Dr Jane Ruby joins Mike Adams with the latest imaging of the mysterious, rubbery string-like clots being removed from cadavers during the embalming process.

Dr Ruby notes that after President Trump signed the Executive Order in 2019, Fauci actually uttered the words, “Self-assembling nanoparticles” when on December 4, 2019 he testified at the Committee on Energy and Commerce Subcommittee on Oversight and Investigations Hearing on “Flu Season: US Public Health Preparedness and Response”

“NIAID has prioritized research to develop state-of-the-art vaccine platform technologies that could be used to develop universal influenza vaccines, as well as to improve the speed and agility of the influenza vaccine manufacturing process. These platform technologies include DNA, messenger RNA (mRNA), virus-like particles, vector-based, and self-assembling nanoparticle vaccines.”

She says, “So, this is what you’re seeing develop in here. This is not a vaccine, it’s not here for your health, it’s not going to confer future protection…

“It’s hard to believe that your government is no longer there and that your agencies have collapsed and there’s some worldwide force that’s actually trying to kill you off and make you suffer before they do it.

“But I go back again – this is an industry, itself that’s being silenced. If any of this was innocent, there would be outcries from those organizations and agencies that previously protected us.”

She says the biggest giveaway that none of this is a mistake is that none of the agencies and the Big Pharma corporations are responding to the hundreds of thousands of under-counted deaths and injuries by removing their products from the shelves. Instead, they’re now pushing the vaxx on babies, 6 months old to 5 years old. 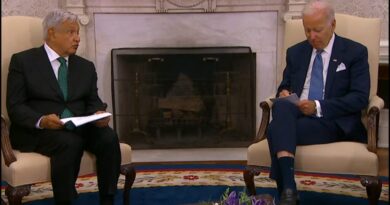 Mexican President Lopez-Obrador Offers to Bail Out the United States from the Biden Created Energy Crisis, and Will Supply Electricity to Texas