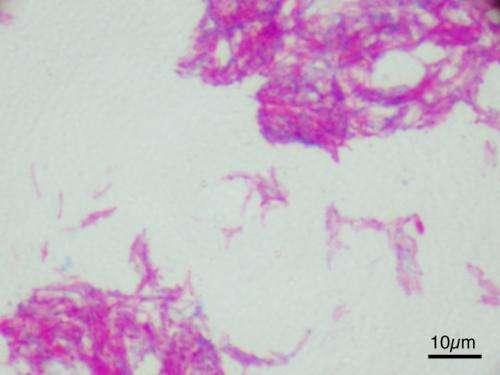 The largest study ever conducted on a free-ranging population of rhinoceroses reveals that about one in every seven rhinos in a key South African national park has been infected with Mycobacterium bovis (M. bovis), the pathogen that causes bovine tuberculosis (bTB). The finding shines new light on the potential for diseases to disrupt global conservation efforts, and potentially increase risk to human health, if left unaddressed.

While the research results prompted concern, evidence provided by the study is crucial to support effective conservation efforts to protect the already vulnerable rhino population. Added to this, scientists with the Animal TB Research Group, situated within SU’s Faculty of Medicine and Health Sciences, developed a novel diagnostic test to detect M. bovis infection in rhinos, which will greatly aid conservation efforts.

These results are also relevant in the U.S., where bovine TB is rare, but can occasionally be found in domestic cattle and other livestock. It can travel across landscapes by carrier species such as white-tailed deer, and it has reached endemic status among deer, bison and elk in parts of North America.

“There are examples of bovine tuberculosis in wildlife systems throughout the world,” said Carmel Witte, Ph.D., a quantitative epidemiologist with San Diego Zoo Wildlife Alliance and senior author of the study. “In the United States, spillover of infection from cattle has spread to white-tailed deer in Michigan. This, in turn, can create spillback of infection into livestock, and carries a risk of spread to other wildlife and people.”

The researchers emphasized that the presence of infection does not mean that the animals are diseased or dying. Professor Michele Miller, who leads the Animal TB Research Group and is the National Research Foundation (NRF) South African Research Chair in Animal TB, said their research shows that most of the rhinos can contain the infection if they are otherwise healthy.

“It can be compared to humans who are infected with COVID-19 or have latent TB, but are asymptomatic,” Miller said. “The infected rhinos are harboring the bacteria, but their immune system is keeping it in check. They are not losing weight or coughing, and if you looked at a group of 400 rhinos, you wouldn’t be able to pick out those that are infected. They can potentially live for years with infection if it is contained.”

Witte added that the eventual population-level health effects of bTB are currently unknown. “Tuberculosis tends to be a disease that manifests over long periods of time, and when you compound an infectious disease with events such as climate change and unprecedented mortality due to poaching of endangered animals, it is cause for concern,” she said. “Continued surveillance of rhinoceros, as well as other animals, can help us understand the long-term impact of this infection in wildlife and prevent catastrophic population losses and further disease spread.”

Wynand Goosen, Ph.D., Wellcome International Training Fellow in the Animal TB Research Group, highlighted the importance of the further development of diagnostic tools and of a “Tuberculosis One Health” approach.

“Even though our research is very important from an animal conservation perspective, it is just as important from a human health-risk perspective,” Goosen said. “To avoid the next pandemic in people, livestock and wildlife will have to be actively monitored for various infectious pathogens with zoonotic potential. This requires appropriate diagnostic tools that are rapid and accurate. To develop these tools, research in all susceptible species is of the utmost importance.”

The study, which was published in the American scientific journal PNAS (Proceedings of the National Academy of Sciences) today (June 6, 2022), identified proximity to buffalo herds (for white rhinos) and a sampling year (for black rhinos) that coincided with periods of drought as risk factors for M. bovis infection.

A significant cluster of cases was detected near Kruger’s southwestern border, although infection was widely distributed across the rhinos’ range in the large national park. The identified cluster is close to the park’s border with the surrounding Mpumalanga province, consisting primarily of farmland with livestock herds that have historically been implicated in spillover of M. bovis to wildlife in Kruger, especially to buffalo.

Dr. Peter Buss, veterinary senior manager in Kruger National Park’s Veterinary Wildlife Services, added there is no evidence to suggest that bovine TB will have any impact on the population. “The rhinos are being exposed to the organism, they are mounting an immune response, but they are not getting sick and dying from it,” he said.”The same applies to other species. For example, we know that we get TB in our lions, and that individuals will die of the disease. But if you look at the population level of the disease, lions seem to be doing fine and their numbers have remained fairly static.”

The authors further emphasized that the findings were not a surprise, since bovine TB is prevalent in at least 15 other species in Kruger—one of Africa’s largest reserves—but that their research has significant positive implications for SANParks’ rhino conservation and management strategy.

“While this pathogen may not appear to drastically impact the health of rhinoceros individuals, it has significant implications for conservation management decisions,” explained Rebecca Dwyer, lead author of the study and a Ph.D. candidate in the Animal TB research team. “For example, tuberculosis testing in KNP rhinoceroses that are earmarked for translocation for conservation reasons can increase confidence of minimal risk of spread to other susceptible individuals at their destinations.”

“With South African rhinos being threatened by poaching, habitat loss and drought, it is key to be able to translocate them to strongholds where they can be kept safe, and to preserve their genetic diversity,” said Miller. “But bovine TB is a controlled veterinary disease, so once our research group, in partnership with SANParks, found bovine TB in Kruger rhinos in 2016, the Department of Agriculture, Land Reform and Rural Development (DALRRD) imposed movement restrictions to prevent spread of infection to other populations.”

These restrictions created a barrier to the movement of rhinos to other national or private reserves and has a significant impact on the conservation of the species, as Kruger has historically been an important source population of rhinoceros for other conservation strongholds in South Africa and other African countries.

The solution was to come up with a test to identify infected animals before they were moved to prevent disease transmission. According to Goosen, the screening test that was used in their study was validated by the Animal TB Research Group in 2019 and was recently approved by the DALRRD for use in Kruger rhinos.

A management strategy involving a quarantine protocol and testing schedule was devised in collaboration with SANParks, and has been approved. “Should we now wish to start moving rhinos out of Kruger, we have that option to quarantine them and test them, and then send them out,” said Buss.

Dwyer added: “The findings of this study are significantly important for wildlife conservation—not just of rhinoceros, but of many other species in this context. It demonstrates that the spread of pathogens in multi-host systems has important consequences for conservation of different species and of the ecosystem as a whole.”

Journal information: Proceedings of the National Academy of Sciences