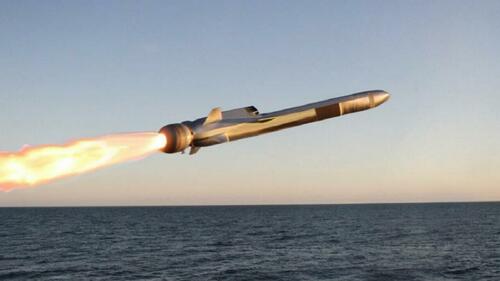 At a moment Ukrainian forces are on the brink of total defeat in Luhansk province in the country’s east, and with the Kremlin now claiming almost 100% control of the region, given its army has the final key city of Severodonetsk completely surrounded and Russian troops have reached the town’s center, the White House is rolling out yet another new high price tag weapons transfer to Kiev.

“The White House is expected as soon as Wednesday to announce around $1 billion dollars worth of new weapons aid for Ukraine, including anti-ship rocket systems, artillery rockets, and rounds for howitzers, people familiar with the packages said,” Reuters reports Wednesday morning.

The anti-ship rocket systems in particular will be viewed from Moscow as another serious escalation, also given the mid- April sinking of the Moskva by Neptune anti-ship missiles. It was a humiliating blow to Russian forces given it was the flagship of Russia’s Black Sea Fleet.

Earlier in the morning Bloomberg too reported that Biden admin is looking at the new tranche of US weaponry to be more than $650 million worth.

Bloomberg is reporting further that the new package is to “include, for the 1st time, vehicle-mounted Harpoon anti-ship missiles.”

The Zelensky government has been begging Washington and the West for more arms, saying the fate of the Donbas is on the line as it’s clear at this point Russian forces are steadily advancing and solidifying their hold over the east, and increasingly over southern regions too, potentially threatening Odesa.

BIDEN: “I don’t want to hear any more of these lies about reckless spending. We’re changing people’s lives!” pic.twitter.com/9dDHCxHYyP

“The Damage Could Be Huge”: Chinese Banks Tumble, Swept Up In Mortgage Nonpayment Scandal As Borrowers Revolt