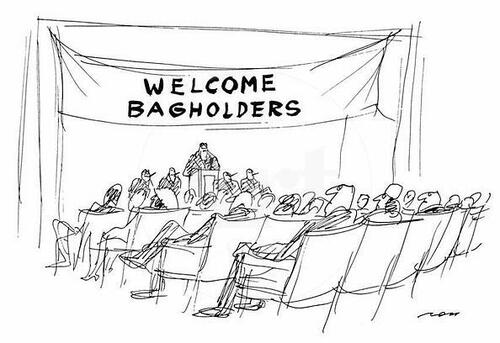 There would be some deliciously karmic justice if the “dumb money” driving a rally that forced the “smart money” to cover their shorts and chase the rally that shouldn’t even be happening.

Being cursed with contrarianism, as soon as a trade gets crowded and the consensus is one way, I start looking for whatever is considered so unlikely that it’s essentially “impossible.” Sorry, I can’t help myself.

The crowded trades are 1) long the Commodity Super-Cycle and 2) long hurricane-force recession for all the persuasive reasons we all know: global scarcities, geopolitical tensions, soaring US dollar and interest rates, de-risking, crazy-stupid levels of debt and speculation, etc.

The consensus holds that “Smart Money” rotated out of tech stocks and other over-valued equities into oil and commodities. That was a smart move, indeed, and the earlier one rotated out of equities and into commodities, the smarter the trade.

In this scenario, retail owners of equities are the “Bagholders,” those who continue owning the losers all the way to the bottom (Been there and done that). It’s a market truism that Bull cycles only end when retail drinks the speculative Kool-Aid of the moment and buys into the final gasp of the rally, allowing “Smart Money” to distribute their shares to the retail chumps, who go down with the ship when the market finally rolls over.

2022 has followed that script closely: as markets have been crushed, down 20% to 35%, and Wall Street sentiment is extremely bearish, retail owners haven’t followed hedge funds in liquidating equities.

In the Bagholder / Smart Money script, the market can now descend into a Bear Market as liquidity dries up and buyers vanish, leaving the Bagholders to absorb the mounting losses.

Maybe this script plays out, maybe not.

The contrarian has these observations:

1. Institutions haven’t liquidated their positions in Apple and other Big Tech stalwarts just yet. There’s been trimming around the edges and that’s why these stocks have been pounded by selling. But liquidation? Not yet. These companies are still quasi-monopolies and still immensely profitable.

2. The mood on Wall Street might be extremely bearish ( The Mood On Wall Street Has Never Been More Apocalyptic), but the top 10% of households who own roughly 90% of financial assets may not be as close to panic as many seem to think. (Note that the majority of this wealth is held by the top 5%–the segment between 6% and 10% owns a relatively small slice of household wealth.)

A. Many of these households are old enough to have experienced the 2000-2003 Bear Market / dot-com collapse and the 2008-09 Global Financial Meltdown, a.k.a. Global Financial Crisis. They survived, and the take-away for many is that basic investment strategies weather downturns: avoid highly speculative fads (meme stocks, NFTs, iffy crypto schemes, etc.), diversify and patiently ride out the storm.

B. These households by and large did not speculate in meme stocks, NFTs, etc., so the staggering losses did not fall on them, or they limited their exposure to the degree that the losses were more painful to their self-image as savvy investors than to their total wealth.

C. Most of these households have multiple sources of income and stores of wealth. Even major drawdowns in equities don’t threaten their financial security. Right or wrong, their experience is that even the gloomiest crises don’t last.

E. Due to their earnings and range of assets, these households can add to investment positions in ways the bottom 90% cannot.

3. Commodities are priced on the margin, and a sharp decline in demand combined with a modest increase in supply could cascade into price declines that everyone who bought into the Commodity Super-Cycle do not believe are even possible, much less likely. But if supply drops 5% and demand plummets 10%, prices crash once the speculative hot air deflates the leveraged hot-money premium.

All this sets up the potential for “Bagholders” to “buy the dip” in stocks aggressively enough that “Smart Money” will be forced to cover their short positions and chase the rally. This will be frustrating to the “Smart Money:” don’t those fools know we’re heading into recession and they should panic-sell?

This will be frustrating for another reason: the entire point of distributing to Bagholders is to book profits and then wait for the Bagholders to sell at the bottom, in either panic or despair. Then the Smart Money scoops up the assets at bargain prices and awaits the re-entry of the burned-but- ever-greedy Bagholders.

There would be some deliciously karmic justice in the “dumb money” driving a rally that forced the “smart money” to cover their shorts and chase the rally that shouldn’t even be happening, dang it. Stranger things have happened.

My new book is now available at a 10% discount this month: When You Can’t Go On: Burnout, Reckoning and Renewal. If you found value in this content, please join me in seeking solutions by becoming a $1/month patron of my work via patreon.com.