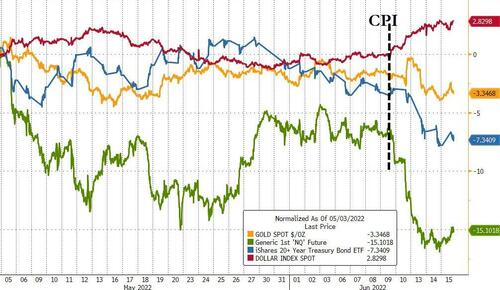 Tl;dr: The Fed hiked rates by a stunning (but expected) 75bps – the biggest hike since 1994. Esther George dissented (preferring 50bps). Fed expresses that is “strongly committed” to fighting inflation.

The Fed sharply raised its rates outlook (to meet market expectations) and sharply lowered its growth and employment outlooks.

Since the last FOMC statement on May 4th, all hell has broken loose in global capital markets (and economies).

US equities have collapsed (Nasdaq -15%) and US Treasury yields have exploded higher. Gold is down around 3% since the last FOMC, mirroring the 3% or so gain the USDollar Index…(NOTE everything shifted after last Friday’s CPI)

…pushing the yield curve back into inversion once again…

While the last FOMC statement crowed of the underlying strength of the US economy, macro data has dramatically and serially disappointed in the month or so since…

Today will also see the release of new forecasts by Fed members. The current market expectations are dramatically above The Fed’s last dot-plot, so we expect significant changes…

Here’s what The Fed did:

The Fed shifted its dots up to the market…

Bear Traps’ Highest Conviction Trade: A Perfect Storm Is About To Hammer The Dollar