The elitist think tank one-sidedly supports wealth, power, privilege and forever wars at the expense of the general welfare.

Before taking over as the Street’s main man, likeminded maestro of misery Greenspan wrecked things by money printing madness — what’s been standard operating procedure for decades to benefit privileged interests at the expense of most others.

If he ran the Fed, he’d limit its “activities to making sure that the economy had a suitable amount of liquidity to function normally – a Goldilocks formula, not too hot, not too cold, just right.”

It has a “very poor record, and it’s done more harm than good” by creating financial crises.

“I have for many years been in favor of replacing the Fed with a computer (that) would print out a specified number of paper dollars” to augment the money supply — the “same number, month after month, week after week, year after year.”

“The Fed has had very few periods of relatively good performance.”

“For most of its history, it’s been a loose cannon on the deck, and not a source of stability.”

“I do not believe the Fed ought to let its monetary policy be determined by the stock market.”

“The Fed ought to devote its attention solely to keeping a relatively stable price level of goods and services,” along with working to achieve full employment.

GDP growth doesn’t depend on elevating the national debt.

By producing investment bubbles for Wall Street, maestros of misery Greenspan, Big Ben, Yellen and Powell — the monetary equivalent of the Four Horsemen of the Apocalypse — showed indifference toward Main Street.

Along with third-worldizing America beyond where their predecessors went, they handed Wall Street and other privileged interests trillions of dollars of easy money.

They facilitated the largest-scale wealth transfer in world history, along with protracted Main Street Depression conditions for most US households — what’s on the cusp of deepening.

Interest rates artificially kept at near-zero for years benefitted speculators at the expense of savers, retirees and ordinary people overall.

In 2002, Bernanke was nicknamed Helicopter Ben for the following remarks, saying:

The Fed “has a technology called a printing press.”

It “allows it to produce as many US dollars as it wishes at essentially no cost.”

Money is created out of thin air when banks extend loans.

When old ones are repaid faster than new ones, the money supply contracts.

Handing it to Wall Street parks it in their reserve accounts — what David Stockman called “high grade monetary heroin.”

It’s “kill(ing) the patient (by) legalized bank robbery,” he once said.

They all burst. No exceptions. This time isn’t different.

Years of money printing madness and bailouts reflect “the single most shameful chapter in American financial history,” he stressed.

Bernanke, his predecessor and successors operated by Abraham Maslow’s maxim.

“(I)f the only tool you have is a hammer, every problem looks like a nail,” he said.

It creates jobs. When people have money they spend it.

A virtuous cycle of prosperity follows.

America once was sustainably prosperous.

Kleptocratically run today, it’s in decline and third-worldized for most households.

Ignoring the highest US inflation since 1947 at 16.8% — not the officially reported 8.6% figure cited by Bernanke, he asked the following:

Dismissive of perfect storm conditions not experienced earlier in our collective lifetime, he defied reality by falsely claiming “absolutely not (sic).”

Things are far worse today than any previous time in modern memory.

“The depth and magnitude of the economic drop-off took Modern Monetary Theory – or the direct monetization of massive fiscal spending – from the theoretical to practice without any debate.”

“It happened globally with such speed that even a market veteran like myself was left speechless.”

He shares responsibility for engineering hard times for most Americans to benefit the privileged few.

He knows the mess he was involved in creating has no easy solutions.

That when viewed in hindsight years from now, the 70s may be remembered as mild compared to the gathering storm now underway — what’s likely to be deep, protracted and destructive to the lives and well-being of most Americans.

Claiming that lessons learned a half century ago “make a repeat of that experience highly unlikely” amounts to whistling past the graveyard by Bernanke.

Since becoming Fed chairman in February 2018, Powell made the mess he inherited much worse by greater money printing madness than all his predecessors combined.

Stuck between a rock and a hard place, he’s damned no matter what course he follows.

As always, ordinary people will suffer most from wrongheaded policies.

In its early stage, a punishing bull market in inflation likely has a long way to go before easing — because of years of monetary madness.

As explained in a previous article, the Powell Fed printed more money than what was created previously throughout US history.

What kickstarted accelerated inflation is now out of control.

Likely to persist for some time, perhaps years, there’s little the Fed can do to reverse the colossal mess it made.

As long as money is controlled by Wall Street to benefit the nation’s ruling class over the general welfare — instead of in public hands where it belongs — privileged interests alone will prosper at the expense of most others.

The same reality applies to its long ago lost “credibility.”

Instead of stabilizing the economy, smoothing out the business cycle, managing healthy, sustainable growth, and maintaining price stability, the Wall Street controlled Fed failed on all counts by serving monied interests exclusively. 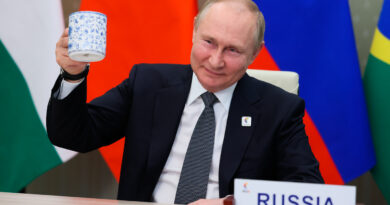 THE RISE OF BRICS: THE ECONOMIC GIANT THAT IS TAKING ON THE WEST

Tyrmand: Martial Law is Coming to Brazil Next Week. If Not: Then Gulags and Venezuela Await.