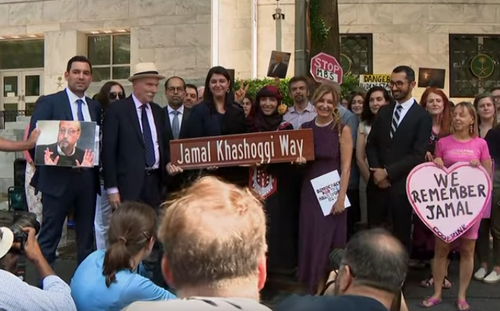 Less than a month before President Joe Biden is set to meet with Saudi Crown Prince Mohammad bin Salman – who US intelligence believes ordered the murder of US-based journalist Jamal Khashoggi – Washington DC trolled the prince by renaming the street in front of the Saudi Embassy ‘Jamal Khashoggi Way’ – with a sign stuck right outside the entrance.

While President Joe Biden has signaled he’s ready to ‘move on’ after previously calling Saudi Arabia a “pariah” nation and declassifying a US intelligence assessment that points the finger straight to MbS himself for ordering the October 2018 grisly murder and dismemberment of the WaPo columnist at the Istanbul consulate, it seems many in D.C. who knew the US resident and journalist are not.

The Saudi ambassador to the US and embassy staff will now be reminded of the state-sponsored assassination on a daily basis as they come and go, even if Biden is pledging to ‘forgive and forget’ – given the average price of gas this week raised above $5, and the White House needs the Saudis to ramp up output.

A prepared statement from Khashoggi’s fiancée Hatice Cengiz upon the street sign’s unveiling was blistering – calling out Biden’s hypocrisy and demanding answers. It began: “Today, on this happy but very solemn occasion, I have two messages. My first message is to Jamal. Dear Jamal, the ideas and values you lost your life defending have been celebrated worldwide and continue to spread in the region and in the globe.” It continued:

“My second message is to President Joe Biden. Mr Biden, you’ll soon visit Saudi Arabia as president, where you’ll meet with Jamal’s heartless executioner, dishonoring yourself and Jamal… Mr President, I beseech you not to lose your moral authority or overlook this heinous crime. You must uphold your vow to bring all the perpetrators of this brutal crime to justice.

“As disappointing as this is, if you have to put oil over principles and expediency over values, can you at least ask, ‘Where is Jamal’s body? Doesn’t he deserve a proper burial?

Cengiz further posed, “And what happened to his killers?” And she said broadly of the kingdom’s abysmal human rights record: “Ask also about the hundreds of other political prisoners rotting in Saudi jails and the victims of brutal repression like Jamal, who have been suffering immensely under an oppressive regime.”

Meanwhile, a CNN report days ago included the revealing commentary that Biden has “set aside his moral outrage” – apparently in order to go after the “bigger bad guy” of the moment, Vladimir Putin.

The Jamal Khashoggi Way sign outside the Saudi Embassy in DC.

This sign now stands as a powerful reminder to those complicit in the brutal murder of Jamal: We’ll keep fighting until all those responsible are held to account.#JusticeForJamal pic.twitter.com/Kma9n6SnAo

“But officials say Biden, who is under immense pressure to crack down on Russia and lower domestic gas prices amid inflation that’s rising at the fastest pace since 1981, has set aside his moral outrage to pursue warmer relations with the Kingdom amid the dramatic global upheaval spurred by the Kremlin’s invasion of Ukraine,” the CNN report said.

The White House in a Tuesday announcement set the date for Biden’s controversial trip to Riyadh. The itinerary for the July 13-16 official trip includes an initial stop in Israel and the West Bank, before the final leg in Jeddah, Saudi Arabia for a summit of Gulf Cooperation Council (GCC) leaders. That’s when he’ll have a face-to-face with ‘killer’ MbS. 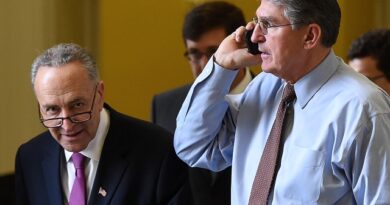 Republicans Warn Democrats Will ‘Pay the Price’ for Spending Bill 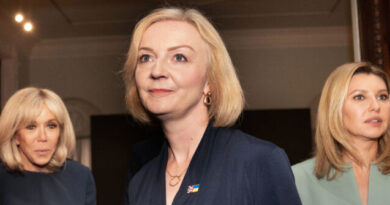