British author Aldous Huxley is best known for his 1932 book ‘Brave New World’ which became a model for much dystopian science fiction that followed. Brave New World was written between World War I and World War II, the height of an era of technological optimism in the West. Huxley picked up on such optimism and created the dystopian world of his novel so as to criticise it, Britannica notes.

But what exactly were Aldous Huxley’s views? Did he in fact believe in the need for a scientific dictatorship? A scientific caste system? Was he actually warning the people that such a dystopia would occur if we did not correct our course or was it all part of a mass psychological conditioning for what was regarded as inevitable and that Huxley’s role was rather to “soften the transition” as much as possible towards a “dictatorship without tears”?

Cynthia Chung explored the true story behind Aldous Huxley’s Brave New World in a paper published as a series of four articles. Below is an extract from Part 2 which consists of three sections: the war on science; modern science begets modern religion begets a modern utopia; and, the 20th century descent of man.

The 20th Century Descent of Man, by Cynthia Chung

At the very start of the 20th century, the influential International Congress of Mathematicians organised a conference in Paris, France in 1900. It was at this conference that David Hilbert, a leading mathematician at Göttingen University was invited to speak on the future of mathematics, where he stressed the need for the field of mathematics to “prove that all axioms of arithmetic are consistent” and to “axiomatise those physical sciences in which mathematics plays an important role.”

What Hilbert was calling for in his challenge for the future of mathematics was that all scientific knowledge be reduceable to the form of mathematical “logic” so to speak; that it be contained within a minimum of accepted truths and rules of derivation, which could be proven by consistent and complete formal mathematical proofs.

Thus, all scientific knowledge would in the future be deduced from such mathematical models, there was nothing left to “discover” in the typical sense of what defined scientific investigations during the 19th century and earlier, they only need to refer to the appropriate mathematical model.

In 1900, Bertrand Russell and Alfred North Whitehead set out to meet Hilbert’s challenge which resulted in the ‘Principia Mathematica’, published thirteen years later.

Although Kurt Gödel would disprove the entire premise for the ‘Principia Mathematica’ with his “incompleteness theorems” which show the limits of provability in formal axiomatic theories, the ‘Principia Mathematica’ is one of the most influential works of the 20th century, on not only shaping modern logic but also formed the basis for the latter development of cybernetics and systems analysis by Russell’s student Norbert Wiener during WWII.

Before you conclude that Russell himself didn’t personally believe that irrationality was a fundamental force in the Universe simply because he tried formalising said Universe, it is worth reading a section of his bitterly misanthropic view of humanity presented in his 1903 “A Free Man’s Worship”:

“That man is the product of causes that had no prevision of the end they were achieving; that his origin, his growth, his hopes and fears, his loves and his beliefs, are but the outcome of accidental collocations of atoms; that no fire, no heroism, no intensity of thought and feeling, can preserve individual life beyond the grave; that all the labours of the ages, all the devotion, all the inspiration, all the noonday brightness of human genius, are destined to extinction in the vast death of the solar system, and that the whole temple of Man’s achievement must inevitably be buried beneath the debris of a universe in ruins – all these things, if not quite beyond dispute, are yet so nearly certain that no philosophy which rejects them can hope to stand… Only within the scaffolding of these truths, only on the firm foundation of unyielding despair, can the soul’s habitation henceforth be safely built.”

Whether deterministic or random in view, the goal was the same, to promote a concept of the Universe that had no governing purpose, no directionality and no morality, that it was essentially a mechanism, discoverable by a few simple laws. This was not something new, the Enlightenment had already done much to emphasise individualism, scepticism and “science” reduced to the confines of empiricism and agnosticism.

With such a view our connection to the Universe becomes inconsequential, with the Universe seen as something cold, unknowable and ultimately dead or dying. Such a concept only further enforces that there is no real meaning to anything, there is no purpose, at least, it is not a purpose that we have any place in.

During the First World War, Aldous Huxley spent much time at the Garsington Manor, home of Lady Ottoline Morrell, a lover of Bertrand Russell, who believed (as Aldous and Julian would also), in the concept of open marriage. Although T.H. Huxley knew Russell’s parents, Lord and Lady Amberley, it was at the Garsington Manor that Aldous first met Bertrand Russell and the Bloomsbury Group.

It is also where he met his first wife Maria Nys, a wartime Belgian refugee who had been invited to stay with Lady Ottoline Morrell. Maria, who was bisexual, had entered into a several-year love affair with Lady Ottoline starting at the age of sixteen. Maria did finally accept Huxley’s proposal and they were married in 1919 keeping an open marriage.

The Bloomsbury Group or “Set,” which met regularly at Lady Ottoline’s was an association of English writers, intellectuals, philosophers and artists which reflected in large part the influence of G.E Moore (who wrote the ‘Principia Ethica’ in 1903) and Bertrand Russell who were amongst the founders of analytic philosophy. Alfred North Whitehead was also a member of the group.

As Dorothy Parker, an American poet and writer, described them in a famous quote of hers, “they lived in squares, painted in circles and loved in triangles.”

Huxley would maintain a loose association with the Bloomsbury Group. It appears Huxley had a similar approach to Russell as he did with Wells, although he seems to have a serious dislike for both men, he nonetheless was greatly influenced by their works. In 1932, Russell exclaims in a letter to his publisher that the ‘Brave New World’ was “merely an expansion of the two penultimate chapters of his ‘The Scientific Outlook’,” adding that “the parallelism applies in great detail, e.g., the prohibition of Shakespeare and the intoxicant producing no headache.” Russell went so far as to contemplate charging Huxley with plagiarism, which his publisher dissuaded him from pursuing.

In Russell’s ‘The Scientific Outlook’, published in 1930, he describes a caste system with the need for two separate modes of education, one for the elite ruling class and the other for the slave class. The ruling class is to be concerned with improving the scientific technique, while “the manual workers [are to be] contented by means of continual new amusements.”

Huxley echoes this sentiment in his ‘Brave New World Revisited’, where he writes:

“The older dictators fell because they could never supply their subjects with enough bread, enough circuses, enough miracles and mysteries.”

Although it is said that Huxley wrote the ‘Brave New World’ as a satire of the works of H.G. Wells, and what appears to be the works of Russell as well, as already shown in Part 1 this is not true. Aldous is incorporating the ideas of Wells and Russell into his works, and though he may find these men dislikeable, he nonetheless never actually contradicts their views in any of his writings or lectures. The entire premise for his ‘Brave New World Revisited’, published in 1958, instead reinforces those very views.

Huxley makes it crystal clear that he considers the world to be overpopulated, that this is a crisis that must be checked, and that science and progress cannot be free to advance without limits. He restresses these very themes again in his last novel ‘The Island’ as well.

“The annual increase of numbers should be reduced. But how? We are given two choices – famine or pestilence and war on the one hand, birth control on the other…how can those who ought to take the pill, but don’t want to, be persuaded to change their minds? … In reducing the birth rate of those industrially backward societies where such a reduction is most urgently needed? … Or consider the backward societies that are now trying to industrialise. If they succeed, who is to prevent them, in their desperate efforts to catch up and keep up, from squandering the planet’s irreplaceable resources as stupidly and wantonly as was done, and is still being done, by their forerunners in the race?”

Here we need only replace the word “pill” with “sterilisation” and not much has changed.

In fact, as published in The Guardian, “Huxley was in favour of genetic breeding programmes to arrest the multiplication of the unfit. In a particularly unsavoury article, published in 1930 in the Evening Standard, he confessed anxiety about the proliferation of mental defectives and called for their compulsory sterilisation.”

Brave New World was written one year later in 1931.

Cynthia Chung is co-founder and editor of the Rising Tide Foundation.  She is also a contributor to Strategic Culture Foundation.

In the last quarter of 2021, Chung published a four-part series on Aldous Huxley. You can find links to all four articles HERE.

Our article above is an extract from Part 2, ‘The War on Science and the 20th Century Descent of Man’. 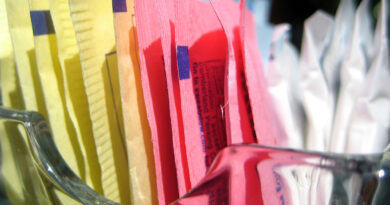