In case you have been living under a rock for the past year, because as DB’s Jim Reid writes today, “this is a day for the ages with a 75bps hike from the Fed later today all of a sudden the consensus”. If that wasn’t enough the ECB just held an emergency meeting where discussed their anti-fragmentation plan after 10yr BTPs hit 4.18% yesterday as a result of what the ECB said last week!

On the Fed, Reid reminds us that it was this meeting exactly a year ago that first brought two H2 hikes into the 2023 dot plots where previously lift-off wasn’t expected until 2024. Well, how times change as last night Deutsche Bank’s US economists brought forward their terminal rate forecast of 4.1% to Q1 2023 with 75bps also now expected in July (a consensus view now). Even more remarkably, this time last year the Fed were themselves still expecting to be floored near zero at this point even after the turning point June FOMC.

And while we will have much more to say about the Fed shortly, the topic of today’s Chart of the Day by Reid is the BoJ, who meet on Friday. To be sure, nothing much is expected from them but let’s look at the wider context: as of last night, so far in 2022, 10yr yields in the US, Germany, France, the UK and Italy were up +196bps, +193bps, +219bps, +162bps and +300bps, respectively. Meanwhile 10yr JGBs are up just +19bps, and having traded in a very narrow 5bps range since the middle of March just below the BoJ’s 0.25% target (on several days, they did not trade at all).

As DB’s Tim Baker’s shows in the chart below (and extending on thoughts from DB’s George Saravelos here) this target is becoming more expensive to defend as the global yield sell-off has escalated.

Indeed, as discussed extensively here last night, the Yen has fallen nearly -20% since March – just as we said back then that it would – as Japan “is becoming the last man standing on QE,” according to Reid.

And while there is absolutely no sign that the BoJ is about to change course, Reid writes that as a tail risk, Japan is the first thing he looks at every morning when he wakes up, echoing what we said last night.

As everyone is focused on crypto, the real war is taking place in Japan pic.twitter.com/1IIvmCjI9M

And although the DB house view is that the BoJ won’t change tact until H2 2023, at various points this year there were no signs the ECB or the Fed were prepared to be anywhere near as aggressive as they now look set to be. Both have aggressively backtracked on their own forward guidance. “This leaves the BoJ as the outlier and having to spend a phenomenal amount defending their target”.

Once the BOJ blinks – and it will – all bets are off.

Book Debut: The Truth about Wuhan: How I Uncovered the Biggest Lie in History 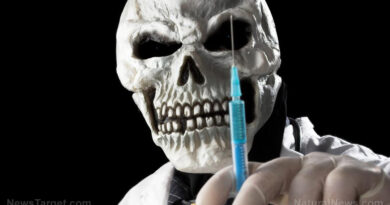 The true history of Pfizer’s criminal conduct and pharmaceutical MURDER