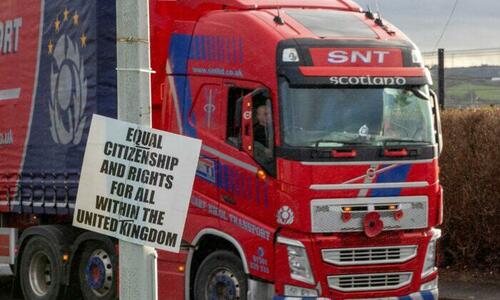 Authored by Alexander Zhang via The Epoch Times,

British business leaders have urged Prime Minister Boris Johnson not to enter a “damaging trade war” with the E.U. after the government set out its plans to scrap parts of the UK-E.U. agreement governing post-Brexit trade arrangements in Northern Ireland.

The Foreign Office said on Monday that the new legislation is intended to “fix parts of the Northern Ireland Protocol – making the changes necessary to restore stability and ensure the delicate balance of the Belfast (Good Friday) Agreement is protected.”

But the E.U. has criticised the UK’s actions for undermining trust between the two sides and violating international law. European Commission vice-president Maros Sefcovic said the E.U. viewed the UK’s actions with “significant concern” and that it would look at launching further legal action to protect the integrity of the E.U. single market.

Make UK, a business organisation representing British manufacturers, said businesses needed both sides to urgently get around the negotiating table to agree on a “pragmatic” settlement.

“We recognise that the protocol in the current state does need to be changed. But the way to do this is not to start a trade war with the E.U. in the middle of a financial crisis which would be damaging for both British and E.U. businesses alike and put further strain on already stretched supply chains.”

The London Chamber of Commerce and Industry said the government’s action risked “significant harm” to businesses across the UK.

“Getting Brexit done was at least meant to deliver certainty to businesses after years of waiting for clarity on the future of the UK’s trade relations with the European Union. The introduction of this bill means we are now teetering on the brink of a trade war with the E.U. and that will mean further economic pain and falls in investment.”

Johnson signed the Northern Ireland Protocol with the E.U. in 2019 as part of the Brexit withdrawal agreement, with the measures aimed at preventing a hard border on the island of Ireland.

But the protocol has been fiercely opposed by unionists in the British province, who complain that it effectively keeps Northern Ireland within the E.U. single market while erecting a border in the Irish Sea between the province and mainland Britain.

Northern Ireland has not had a functioning local government since February, when the Democratic Unionist Party (DUP), then the largest party in the regional assembly, withdrew from the power-sharing executive in protest against the protocol.

US congresswoman to fly Israel flag outside office of Rashida Tlaib