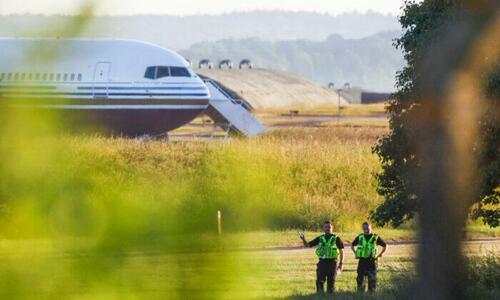 Authored by Alexander Zhang via The Epoch Times,

A flight due to take illegal immigrants from the UK to Rwanda was halted on Tuesday after last-minute interventions by the European Court of Human Rights (ECHR).

Prime Minister Boris Johnson announced on April 14 that people who enter the UK illegally, including those who cross the English Channel in small boats, may end up being relocated to the African country of Rwanda. The UK government said the move is necessary to deter human smuggling.

Pro-immigration activists have argued that the policy is inhumane and unlawful, but the UK courts rejected a request for an interim injunction to stop the Rwanda flight, which was due to take off on Tuesday night.

But the flight was grounded after the ECHR said it had granted an urgent interim measure in regards to an Iraqi national who was due to be on the flight.

It said the individual concerned should not be removed to Rwanda until three weeks after the delivery of the final domestic decision in his ongoing judicial review proceedings.

UK Home Secretary Priti Patel described the ECHR’s intervention as “very surprising,” but insisted that the government will not be deterred.

“We will not be deterred from doing the right thing and delivering our plans to control our nation’s borders. Our legal team are reviewing every decision made on this flight and preparation for the next flight begins now.”

The main opposition Labour Party said ministers have only themselves to blame for what happened.

“They have pushed ahead with a policy they knew was unworkable, unethical, and incredibly expensive because they just wanted a row and someone else to blame,” said shadow home secretary Yvette Cooper.

Earlier, Johnson highlighted the legal profession as the main source of opposition to the Rwanda policy, and suggested lawyers trying to stop deportations of illegal immigrants are “abetting the work of criminal gangs.”

Talking to Sky News on Wednesday, Work and Pensions Secretary Therese Coffey said the government is “highly confident” that the next deportation flight to Rwanda will go ahead.

The Rwandan government, who has agreed to accommodate the illegal immigrants under a partnership with the UK, also said it is “not deterred by these developments.”

Government spokeswoman Yolande Makolo said: “Rwanda remains fully committed to making this partnership work. The current situation of people making dangerous journeys cannot continue as it is causing untold suffering to so many.

“Rwanda stands ready to receive the migrants when they do arrive and offer them safety and opportunity in our country.”

“Watch For The Tipping Point”: Bank Earnings To Give Key Insight Into Slowing Economy

Spain Is Latest To Announce Billions In “Inflation-Relief” Stimmies