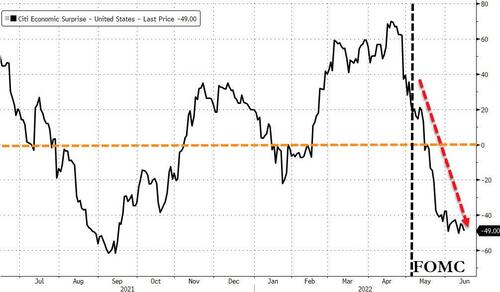 Listening to Powell speak during the press conference, one would think that when it comes to the economy, it’s blue skies as far as the eye can see:

…as Jeff Gundlach was quick to point out…

*GUNDLACH ASKS CNBC ‘WHERE IS THE STRONG ECONOMY’ PEOPLE MENTION

“CEO confidence declined sharply in the second quarter of the year for the fourth straight time. The Conference Board’s measure slipped to 42 in the second quarter, the lowest level since the onset of the pandemic, from 57 in the prior period. Historically, a reading of that level has coincided with profits recessions or negative year-over-year changes in earnings. Over the past 40 years, the measure has only been that low in 1980, 1991, 2001, 2008, 2012 and 2020“

But what is more remarkable is that according to even the latest estimates from Bloomberg Economics, which of course is tied to Bloomberg, a pro-Biden liberal media outlet run by Democrat billionaire Michael Bloomberg, a recession by the start of 2024, barely even on the radar of most economists just a few months ago (if not this site), is now virtually assured at close to a three-in-four probability.

Bloomberg next repeats – with a long delay – something else we said all the way back in December, namely that the Fed outsized rate hike has pushed the economy into a recession…

On Wednesday the Fed delivered its biggest interest-rate hike in almost three decades, as it takes the fight against inflation into overdrive. When central bankers try this hard to slow the economy down, they often end up tipping it into outright reverse.

America’s ‘Misery Index’ – a broad measure of household wellbeing that combines unemployment rates with inflation rates – has not been this highs since President Biden was last in The White House (as VP for Obama in 2011). However, it’s different this time as previously it was labor market strains that spiked the ‘misery’, this time it is the soaring cost of living:

“Inflation affects everyone. Every time they go to the store they see inflation and it makes them angry.”

And their reaction, he says, is: “Let’s blame somebody.”

And while Bloomberg can trot out the blame game, the reality is that absent a miracle a recession is now unavoidable, which also means that Biden is a one-termer:

Still, the mood has turned sour at an alarming pace — putting Biden at risk of joining an unenvied club. From Jimmy Carter to George H.W. Bush to Donald Trump, one-term US presidents of the past half-century all had their re-election hopes fatally injured by the lingering effects of a recession.

… but add the economic devastation on deck, and Republicans are looking at full control of Washington again in 2024:

That prospect is already causing turmoil in the Biden camp, ahead of crucial midterm elections in November when his Democrats must defend thin majorities in Congress — or risk losing what ability they have to get legislation passed, including measures to lift the economy if it slumps.

The economic collapse on deck also means that Democrats are about to unleash the gaslighting machine like never before, blaming everyone and everything, from Putin, to Yellen, to Exxon, to climate change (and yes, eventually even Biden golden-boy Zelensky) for the pain ordinary households are experiencing… just not themselves of course:

Voters are telling Democratic pollsters they see economic storms brewing. Key decisions on issues like student loans are paralyzed by inflation fears, according to one person familiar with White House deliberations. The administration is casting around for outside-the box fixes to show they’re fighting for hard-pressed households, from a windfall tax on oil profits to commitments by retailers to cut prices if China tariffs are removed. And its economists are laying out arguments for why the soaring cost of living isn’t Biden’s fault — and the economy is much better than voters seem to think it is.

Sadly for the liberal propaganda machine, they’ll have to to much better:

“We ask, ‘If the economy were the weather, how would you describe it?’” asks Celinda Lake, one of Biden’s top pollsters during the 2020 election, who says her focus groups are awash with talk of the rising cost of gas and housing — and how wages aren’t keeping up.

“Voters have been describing storms and thunderstorms.” she answers.

And then there is of course the bear market, which the White House is about to learn that mixed with a recession polls even worse than hyperinflation. In fact, as we noted earlier, it has been a hell of a week for Biden:

The week so far:

… and it’s only Wednesday.

As for Republicans, it’s their elections to lose. As Bloomberg notes, the Republican line is that Biden and his team share the blame for soaring prices – which they do – because they pumped another $1.9 trillion of stimulus into the economy in March 2021 when it was already recovering.

“They put money into everybody’s pockets but they didn’t do anything in terms of supply-chain issues,” says David Winston, a GOP pollster and strategist who helps craft economic messaging for Republican leadership in Congress.

“When you increase demand but you don’t figure out how to increase supply at the same time, you get inflation.”

Which is not to say that the White House won’t go down swinging: “the administration’s economists have modeled extreme scenarios — from a new coronavirus variant to an even bigger spike in oil prices — so that they’re prepared to act fast in case of emergency, a senior White House official said.“

In short, get ready for another surprise, “emergency” shock meant to distract from the shitshow that is Biden’s economy and Powell’s galloping inflation and bear market. Only, after the fiasco that was the monkeypox false start, it’s difficult to visualize what – short of a staged war over Taiwan – the Biden propaganda machine will come up with. One thing  is certain – it will try, and if not this year, brace for a very hot summer, full of Soros-funded protests, in both 2023 and 2024 as Democrats go all in on avoiding another humiliating sweep in 2024, with Trump lurking in the shadows.