This is fast moving now, but the Fed is still pouring fuel on the fire.

Struggling to re-establish its shredded and ridiculed credibility as inflation fighter, the Fed today concluded the most hawkish Fed meeting in decades. Following the CPI report last week that apparently had blown all doorknobs off inside the Fed’s Eccles Building, everything got moved higher by a bunch: Actual policy rates, projected policy rates by the end of 2022 and 2023, projected inflation rates, and projected unemployment rates. The only thing that got lowered was the projection of economic growth.

The FOMC voted to hike all policy rates by 75 basis points, the most hawkish move since 1994, with only one dissenting vote (by Esther George, who wanted a 50 basis point hike):

“Clearly, today’s 75 basis point increase is an unusually large one, and I do not expect moves of this size to be common,” Fed Chair Jerome Powell said in his statement at the press conference. But he said that at the next meeting in July, another 75-basis point hike might be on the table.

And the Fed will be “looking for compelling evidence” that inflation is moving down before “declaring victory”, Powell said. This phrase, “compelling evidence,” has been cropping up a lot recently among Fed governors. They’re looking for more than just a little squiggle in the line before backing off.

This is now fast-moving. Today’s “dot plot” in the Economic Materials showed that all 18 FOMC members who participated in the meeting, expected the Fed to raise its federal funds rate to at least 3% by the end of 2022, with 13 members expecting higher rates. The median projection jumped to 3.4%.

The Fed would have to raise its policy rates by another 1.75 percentage points to get to the median projection of 3.4% by the end of this year.

These 3-4% policy rates were unthinkably and impossibly high just a few months ago. It was something the Fed would never ever and could never ever do because of whatever. Now they’re on the table.

Quantitative Tightening (QT) has kicked off.

QT has started this month. The plan was laid out in May. The Fed confirmed today that it is proceeding according to plan. During the phase-in period of June through August, the Fed caps the amount of securities that can roll off the balance sheet at $47.5 billion per month ($30 billion in Treasury securities, $17.5 billion in MBS). Starting in September, the caps will double to a total of $95 billion a month.

If not enough Treasury notes and bonds mature during the month to hit the cap, the Fed will make up the difference by allowing short-term Treasury bills to mature without replacement. In other words, the cap is essentially a fixed amount that will come off the balance sheet.

The Fed will not sell securities outright at this point, but will allow them to mature without replacement. Most of the reductions for MBS will come from the pass-through principal payments that are forwarded to MBS holders when mortgages are paid off (when the house is sold or the mortgage is refinanced) or are paid down through regular mortgage payments.

Still pouring fuel on the fire.

But CPI inflation is now 8.6%, and the “real” EFFR is now a negative 7%, which represents the amount by which the Fed has fallen behind inflation. Its slowness in reacting to inflation is unprecedented in modern times: 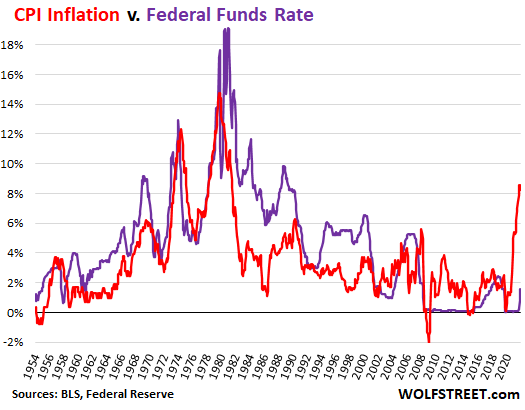 Higher interest rates are supposed to slow demand, which is supposed to remove some fuel from raging inflation. As a consequence of the reduced demand, unemployment is expected to tick up.

This is the first time in this cycle that the Fed is projecting that unemployment will increase as a result of its crackdown on inflation. In the May meeting’s statement, the Fed still expected its magic to bring inflation down to its target of 2%, while the labor market would remain strong. That line went out the window in today’s statement.

And Powell confirmed in the press conference that the Fed is unlikely to be able to get inflation back to 2% without deliberately slowing the economy and raising unemployment.

Rising unemployment would obviously end the “labor shortage” and untangle some of the inflationary and supply-chain issues that came with it.