… or Marko Kolanovic urging clients to buy the dip weekly, until most if not all of them are broke, with the S&P now down about 25% from his first BTFD reco.

Still, JPMorgan is JPMorgan, the bullish (or is that bullshit) propaganda mouthpiece of bulls everywhere, and even though its own CEO now warns to “brace” for an economic hurricane, his bearish sentiment apparently has not trickled down to the bank’s rank and file, who fail to grasp that being blindly bullish in this market is just grounds for perpetual ridicule and mockery.

That appears to be changing, however, because we have yet to hear Marko, or as we sometime affectionately call him, mARRKo, deliver his weekly permabullish sermon and as a reminder, the moment he turn bearish is when everyone should buy…

… while in his daily market note (available to pro subs in the usual place), JPM trader Andrew Tyler focuses not on the market’s upside – but rather on how much it can drop, and – not surprisingly – reaches a conclusion almost identical to BofA’s uber bear Michael Hartnett (who is also the most accurate analyst on Wall Street), and Goldman’s recession case.

Specifically, he writes that by the Fed’s own projections, another 175bps in rate hikes is coming this year while the market is pricing in 200bps (75bps in July, 50bps in Sept/Nov, and 25bps in Dec). He than writes that for fundamental investors, the question is valuation and (i) where are FY2023 EPS estimates and (ii) what is the appropriate multiple?

To answer, he plots the S&P’s PE ratio below, where one can see that market index has spent little time below 15x this century and had a pandemic low ~14.7x. So, hypothetically, Tyler writes, “if you cut consensus FY2023 EPS estimates by 20% ($250 to $200) and apply a 15x multiple you get to 3,000 in SPX.” Incidentally, this is nothing new to regular ZH readers, who have known for over a month that “Today’s Bear Market Ends In October With The S&P At 3,000” (see here) while we also showed that the Goldman recession scenario is 3,150.

JPM’s client conversations reveal as much, with prevailing consensus views on the market bottom existing in the 3,200 – 3,400 range.

As such, Tyler concludes, “this earnings season becomes critical in understanding this situation and whether investors require a heavier P/E discount given the uncertainty around the Fed.”

Looking ahead, JPM – which always parrots the consensus view and is terrified of coming up with original, correct views – echoes Goldman (if not Barclays which correctly first called for a 75bps rate hike and now expects 50 in July) and also sees a 75bps hike in July unless the July 13 CPI prints above 9.5% (in which case the Fed will hike 100bps), between 7-8% (go 50bps), or below 7.0% (go 25bps). JPM also notes that “we learned that CPI + Univ. of Michigan (Consumer expectations) were the game changing data.” Fed aside, the bank looks back and reminds readers that “the May FOMC saw stocks rally Mon – Weds by 4.0% and then fell 7.3% over the next three sessions.”

What happens next? Well, besides reminding readers that the pain trade is a swift rally to 4100+, here are the three parting thoughts from the JPM trader, including two market scenarios:

One final thought from JPM FICC trader Steve Bruner: “I am pretty sure he didn’t specifically try to accomplish this, but Powell’s presser has driven Madame Market’s top of the cycle 4.05% rate (March’23) down 25 bps to hit the 3.80% median Dot bogey; now trading 3.84% (May’23). There is a lot of head scratching in this room with respect to how/why Powell was so intent on telling the market (effectively) don’t get used to 75 bps moves, when in reality, only one more was in the price. If anyone has any ideas on what the possible motivation was there, please share them.“ 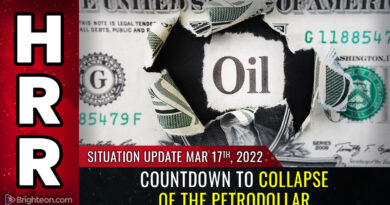 COUNTDOWN to collapse of the petrodollar… America’s dollar dominance is coming to a sudden, catastrophic end… and total CHAOS will follow