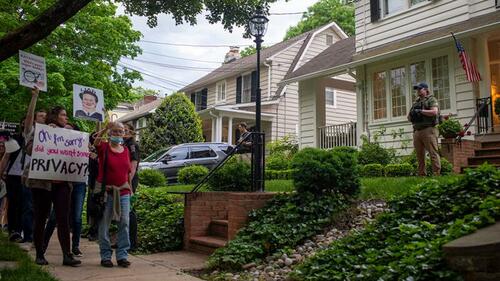 A neighbor of Supreme Court Justice Brett Kavanaugh has detailed how pro-abortion protesters have terrorised the entire community where he lives, even threatening other neighbours, telling them “f*ck you and f*ck your children.”

Speaking anonymously to Fox News, the neighbor says that the protesters have been “aggressively” disrupting the area on multiple days for weeks since the leak of the intention to overturn Roe vs Wade.

“They are people who come from out of the area. They have a staging point in a parking lot fairly nearby,” the neighbor noted, adding that they come specifically at 7pm because they know that is when parents are trying to get their young children to bed.

“There’s little kids who live on the street. It’s a horrific experience,” the neighbor urges, adding “It’s not great if you have kids of any age, but it’s unbelievably stressful and the kids are very upset, the kids have to be sent inside and it’s so loud you can’t put your kids to sleep.”

“They picked the exact time, and they don’t care,” the neighbor continues, claiming that “Literally, there’s no way on a Wednesday night you can put your kid to bed.”

“They have drummers, they have a megaphone, and they chant, they yell all kinds of things… They have told neighbors ‘f*ck you, f*ck your children, things like that – and so they’re abusive toward the neighbors and intimidating,” the person further asserts.

The neighbor also says that police are doing very little to stop the disruption.

“We’ve been told that because they will move eventually when a car comes down the street, they’re not technically blocking the street,” they say adding “What we’ve also been told is that this is ‘behaving within the bounds of the law’ and the only law that could be enforced is the federal law that they’re not supposed to protest outside the home of judicial officers, but the federal partners declined to enforce that law.”

“There’s nowhere to go to get away from it,” the neighbour adds, noting “I think people are very concerned that if there isn’t action taken, that this will escalate in a way that is very unpredictable and very unsafe.”

“There just doesn’t seem to be anyone in a position of leadership or authority who is considering those issues and acting on them and trying to look for a solution rather than just allowing this possibly to escalate,” the person adds.

As we have highlighted, police last week arrested an armed would-be assassin, identified as Nicholas John Roske, who told officials that he “wanted to kill” Kavanaugh, and that the motive for his intended attack was disagreement with the Supreme Court’s assumed plan to overturn Roe v. Wade.

While Republicans including Senator Rand Paul have called for protesters to be removed and arrested from outside Justices’ homes, Democrats have refused to condemn the illegal gatherings, and have even encouraged them. 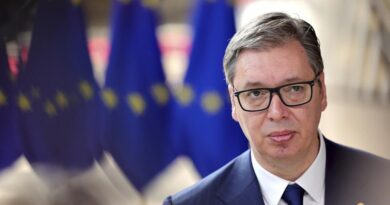 Fyodor Lukyanov: Why are Serbia and Kosovo on the brink of war again?