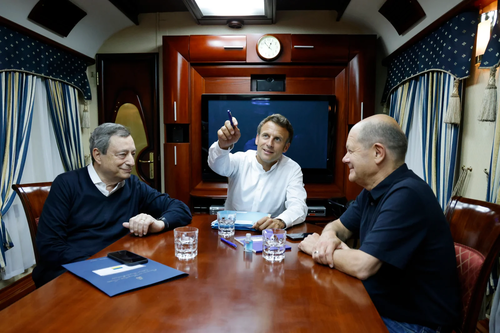 Amid Ukrainian complaints that Western weapons deliveries are not being supplied to frontlines in the east and south fast enough, and with Russia poised to control the whole of Luhansk province in the Donbas region, the leaders of France, Germany and Italy made a ‘surprise’ visit to Kiev on Thursday to meet Ukrainian President Volodymyr Zelensky.

French President Emmanuel Macron, German Chancellor Olaf Scholz and Italian Prime Minister Mario Draghi traveled to the capital by train from Poland, where there intent was to deliver a unified and “strong signal of support” to Ukraine amid the Russian invasion.

The leaders “want to send a strong signal of support and solidarity to president [Zelensky] and the people of Ukraine in these dire times,” according to a German government spokesperson tweet.

Further, French President Emmanuel Macron told reporters in a press conference that the leaders’ presence there marks “an important moment” as “It’s a message of unity we’re sending to the Ukrainians.”

“It’s a message of European unity for the Ukrainian people, support now and in the future, because the weeks to come will be very difficult,” Macron said additionally.

As many as four EU heads of state arriving at once “marks the most high-profile diplomatic visit since the invasion,” Fox News writes, and further details:

Air raid sirens rang out while the men were in their hotel preparing for the meeting – not an infrequent occurrence in Kyiv.

Holding his hand over his heart as he left his Kyiv hotel, Macron said in English, “I want to show my admiration for the Ukrainian people.”

Scholz, for his part, pledged that Germany’s support would continue “for as long as is necessary for Ukraine’s fight for independence.”

These three leaders of France, Germany, and Italy in particular have behind the scenes attempted to get the Russians and Ukrainians back to the negotiating table. Macron in particular has come under fire for holding over a dozen phone calls with Vladimir Putin since the invasion began in late February. At the same time the UK and US position has been a ‘no compromise’ approach while shipping in heavier and heavier weapons systems, provoking the Kremlin to warn of ‘red lines’.

For this reason Bloomberg underscored that “discussions may be strained after Kyiv criticized their governments for engaging too closely with Russian President Vladimir Putin and being slow to deliver weapons needed to defeat his invasion.”