With the S&P diving deeper into bear territory today, it solidly confirmed its status as a bear. While it entered the bear’s woods on Monday by closing at 21.8% down, it shoved its nose deeper into the dirt today like a rooting bear will do to affirm its new identity. The short-lived bull market that began in 2020 is now officially dead in proclamations all over the internet by those who won’t acknowledge we’re in a bear market until the S&P proves it, regardless of other indices.

Well, now it has proved it for those who needed that proof. Overnight, we have shifted to where scarcely a soul around doesn’t recognize that Fed Chair Powell was the matador who killed the bull by stabbing his inflation-fighting darts along the bull’s spine until the great S&P fell to the ground, quivering at his feet. And that is all they were is darts — not swords — for he barely did more than speak about his bold plans.

Nearly everyone — even the Fed — now acknowledges that inflation became so hot and so prolonged it forced the Fed to fight it. Even Janet Yellen confessed she was wrong about inflation being merely transitory. It has turned out to be quite a ravaging little monster. It also drove bond yields skywards and is now absolutely crushing bond funds and starting to wreak havoc between the sovereign debts of European nations, placing the entire global bond market in peril of catastrophic collapse. Not everyone will admit this, but many feel the possibility of such a calamity deep within their chests as articles about it are becoming more numerous. The outward signs are obvious for those willing to look.

Today’s move of the S&P places three major indices fully in the bear’s forest — the Russell 2000, the Nasdaq and now, at last, and firmly, the S&P. The long-unfolding crash that got us here began for the S&P at the start of the year and became the worst losing streak for the S&P since the dot-com bust. That’s a fact.

Bulls die inside of recessions

Most importantly, the arrival of the S&P bear adds one more exclamation point to the fact that we are already in a recession. It’s often said that stocks crash ahead of recessions, but that is only true in terms of where the crash begins. They are almost always only recognized deep inside of recessions.

For evidence of what Tuesday’s solid confirmation of an S&P bear means in terms of the recession concerns that have only recently become a loud chorus, look at the following graph, which shows it is exceedingly rare for the S&P to fall 20% before the recession associated with its crash:

There are a couple of plunges like that in the forties that took their fall ahead of their associated recession, but the rest are a long string of events in which the S&P’s arrival into the bear’s forest happened inside of the recession. The fall toward that consummation, of course, usually does start before the recession, but I am talking about day when it hits the minimum 20% down mark that confirms it has been in a bear market for weeks or even months (as now). That point, as you can see for yourself, usually happens after the recession has begun. While some major indices started sliding clear back in November, the S&P started sliding badly from the start of this year, now nearly half a year ago! So, if you were looking for the S&P to start crashing into a bear market as a forewarning of a recession, your warning came back in January! Once the S&P is down 20%, the recession is typically (in fact, almost always) well underway.

The graph above shows a couple of times where the S&P fell that much and there were no recessions associated with the plunge, such as Black Monday in 1987, but with one quarter of negative GDP already firmly established this year, and the Fed’s own GDPNow forecast for the present quarter below 1% and on a downward trend as the quarter concludes, it seems highly improbable that we are going to skirt a recession — not even in the present quarter, given the solid historic pattern we see in the graph above as to what the S&P tells us about where we are now.

On what basis would one pin realistic hopes that this will be one of the truly exceptional times when the S&P falls 20% before the recession associated with its demise or with no recession associated with the fall? Would you base those hopes on the much-vaunted job market where a number of companies have announced large layoffs this week due to crashing stocks, crashing crypto, crashing bond prices, and falling home prices each messing with their particular line of business? That is already giving way quickly and not too surprisingly so:

“Thirteen Major Fails: a Quick Rundown of our Rundown Economy“

Will you base your hope that this will be the rare exception where the S&P does not hit the 20% down mark inside of a recession on the shortages that pervade the entire globe due to sanctions and war? Then you missed the Pentagon’s promise today that it will fund and arm Ukraine’s war for as many years as it takes, meaning you can be assured the sanctions will also remain in place as many years as it takes.

Will you base it on the hope that China is re-opening its economy and will not close down its major port cities again due to Covid? Then you missed its announcement this week that it might do exactly that in just a matter of days. How about on the constant advancing mirage that Covid lockdowns are now forever a thing of the past all over the rest of world?

Will you rest them secure on the knowledge that one of the widest-spread droughts in US history is growing worse rapidly to where Hoover Dam may have to be shut down for electrical production for the first time in its long history? (Gee, and just when we wanted to power-surge into all-electric vehicles!)

In short, I don’t think there is any reasonable basis in the world to think the S&P has not done what it almost always does do when it falls this hard just so you can maintain belief that the S&P has not just crash-landed in the middle of a recession.

How deep is the woods?

Moreover, look at how dense the bear’s not-so-enchanting forest is. Never before has the Nasdaq (now down more than 30% since the start of the year) had so many stocks that are down by more than 50%. Never! In fact, the vast majority of stocks in the entire US market are so deep in the woods it is hard to find times to compare to.

How long do historic averages say a bear market is likely to last? Well, the shortest bear market was the one that ripped the head off the 2009 bull in 2020, but don’t count on anything like that again: (Something has to be the shortest.)

The most recent bear market, in 2020, lasted about a month. Before that, in 2009, the S&P 500 fell into a bear market that lasted about two months. Other bear markets, including ones beginning in 2007, 2000 and 1980, lasted more than a year. However, there are signs this one could last longer, which means investors may have to think about how severe of a loss they can withstand.

I would say there are a LOT of signs it will last a long time. After all, this one for the S&P is already half a year long. The bear starts from the last peak, not from the day (Monday) when it finally got recognized for being what it has been all that time. And the Fed hasn’t even gotten serious yet, and inflation is still rising, even against steep rises a year ago.

The S&P 500 has fallen by an average of 32.7% in 13 bear markets since 1946, including a nearly 57% drop during the 2007-2009 bear market during the financial crisis…. It has taken a little over a year on average for the index to reach its bottom during bear markets, and then roughly another two years to return to its prior high.

Here is where we currently stand in the S&P lineup of ugly bears (the gray bar):

Since the 2020 bull market was the shortest bull to follow the shortest bear, maybe we’ll now finish what we began in 2020 and would have continued very much deeper into if the Fed had not jumped in with the most massive intervention of money-printing to prop things back up in global history — something it clearly cannot do this time! We now get to see what happens when there is no sudden Fed rescue plan to arrest the market’s plunge.

We are, in other words, finally falling without a safety net. Heck, we’re only 75 basis points into the Fed’s tightening, still below 1% interest (until Wednesday), which is hugely stimulative and loose financially speaking, and we haven’t even started to see the Fed suck back its enormous mass of money printing, yet the market has fallen this far in anticipation of the Fed horrors to come.

The market right now is just selling the announcements to get ready. However, everything investors believed the Fed was announcing it would do just proved last Friday not to be sufficient to kill inflation. So, we’re in a bear market, and all the evidence around us says we’re walking deeper into a forest that is aflame with inflation, which means it will likely take a long time before we’re walking out the other side if we are among those who are so fortunate as to make it through the flaming forest. 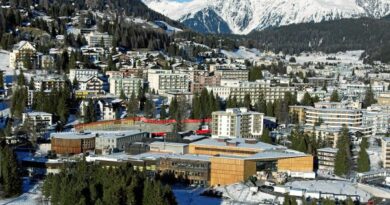 The Myth behind the Federal Power to Strike Down State Laws

HE WORKED W/ TRUE THE VOTE DURING FBI INVESTIGATION