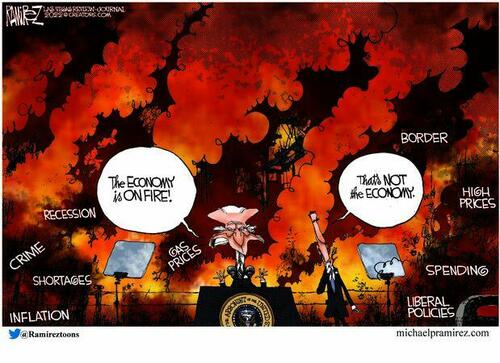 Authored by Ranen Aschemann via The Mises Institute,

Seventeen months ago, as the keys to the oval office changed hands, for all of the political animus and theatrics, one thing seemed a given: the US economy would roar back to vitality in historic fashion, a point of optimism in a nation of discord and incertitude. Yet hope would give way to ambivalence, which, in turn, gave way to serious doubt. Today, a pathetic 23 percent of Americans feel economic conditions are even “somewhat good.” The primary reason for such abysmal economic sentiment? Inflation.

As consumer prices have accelerated out of control over the past year, a new political narrative on inflation has emerged, one that alleges corporate impropriety as the primary catalyst. The motive for such a messaging shift from select members of the political apparatus is clear: a need to shirk accountability for evidently inflation-inducing policies. Unfortunately, the corporate greed narrative has apparently paid dividends to its progenitors, garnering increasing acceptance among the body politic at large. Indeed, according to one poll from Data For Progress, a majority of likely voters now believe price-gouging is a major contributor to heightened inflation. However, that inflation is brought about by corporate greed is a sophistic political lie in every respect.

Yes, corporations are greedy. People are greedy. It turns out that greed is a natural characteristic of the human condition. It always has been. Why, then, has inflation only recently exploded after 40 years of calm, now clipping along at better than four times the Federal Reserve’s target annual rate of two percent?

In May 2020, the Consumer Price Index (CPI) grew just 0.1% year-over-year. Are we to believe that corporations were simply feeling particularly benevolent, only to reverse course in dramatic fashion the very next year? Of course, that is preposterous.

But the prevailing evidence that peddlers of the corporate greed narrative have repeatedly cited is the reality that corporate profits are at historic highs. This is, in fact, true. But it is entirely irrelevant to inflation itself and is not even indicative of any measurably intensified greed.

The Producer Price Index (PPI), which measures cost increases for businesses, is up 10.8 percent from last year. With consumer prices rising at 8.3 percent over the same period, this frankly means that American businesses en masse are likely not even passing on the full extent of the higher costs they themselves are paying, to consumers. So how can this be, even as corporations are raking in record profits? The answer lies in a distinction that the corporate greed crowd will never make: the distinction between corporations and businesses.

In fact, just five percent of businesses are corporations. While the CPI measures the general prices that businesses are charging, corporate profits figures only measure the profits of large corporations. Yet it is chiefly small businesses that cannot afford significant increases in the cost of doing business because they have fewer resources than their larger corporate counterparts. Thus, it is highly probable that small businesses, which account for nearly half of American GDP, are primarily driving broad price increases, on no account of elevated greed, but rather as a result of an increase in their own cost of doing business.

Former Labor Secretary Robert Reich is perhaps the most prominent purveyor of the corporate greed doctrine of inflation. If anyone can point to resounding evidence of malign corporate price-gouging, it should be Reich. In an article laying out his argument for “corporate power” being the catalyst behind record inflation, Reich condemns multinational coffeehouse chain Starbucks for announcing price hikes earlier this year despite being “so profitable.”

What the twice Ivy-educated pundit fails to mention is that Starbucks’ Q1 2022 earnings were cut by more than half when compared to Q4 2021, despite revenue holding steady. Q2 2022 earnings dropped below that of even Q1. What’s more, the company reported lower earnings in 2021 than it did back in pre-Covid 2018, despite having higher revenues. Reich even conveniently ignores the fact that Starbucks recently revealed it would be raising its minimum wage to $15 per hour nationwide beginning this summer.

Evidently, Starbucks isn’t the insatiably gluttonous enterprise that Robert Reich would like you to believe it is. And this seems to be a common theme with many of the companies that he and others proffer as evidence of nefarious profiteering. But it still doesn’t answer for why corporate profits are at historic highs. First, it is important to understand that corporate profit margins are not significantly higher than they were pre-Covid. With that established, it is likely that inordinate growth in consumer spending since the Covid recession is largely to blame for record profits. Needless to say, when Americans drop unprecedented quantities of cash on consumer products, companies whose costs don’t rise significantly fare pretty well.

Certainly, it is understandable how the corporate greed dogma has caught on with vast swathes of the American public. Rancorous anti-corporate sentiment has been prevalent in America for years, and corporations, as such, make for quite convenient political scapegoats. But any effort to broadly place culpability for inflation on the private sector is demagoguery at best, and almost always attempted by ultracrepidarian activists rather than studied economists.

The reality is that the true offender behind record inflation is the US government. The Federal Reserve has inflated the money supply by over 40 percent since the beginning of 2020, allowing congress to hand out checks to the public and driving an unhealthy initial spike in disposable income. As consumers spent off this superficial wealth, prices soared and disposable income tumbled. Consequently, today, as inflation ravages the wallets of everyday Americans, disproportionately impacting low-income families, the personal savings rate has plunged to just half of what it was in early 2019 and is now rapidly approaching all-time lows.

American citizens are being forced to spend larger portions of their income on basic necessities and mundane lifestyle items, leaving less–or no–room for economically stimulating investment or leisure. The great evils of government–not corporation–inflation are every day becoming increasingly apparent. 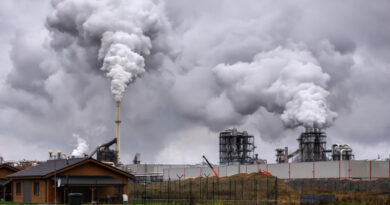 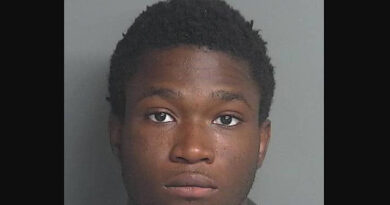 Police: Texas Man Charged in Deaths of Teens with Fentanyl in Systems