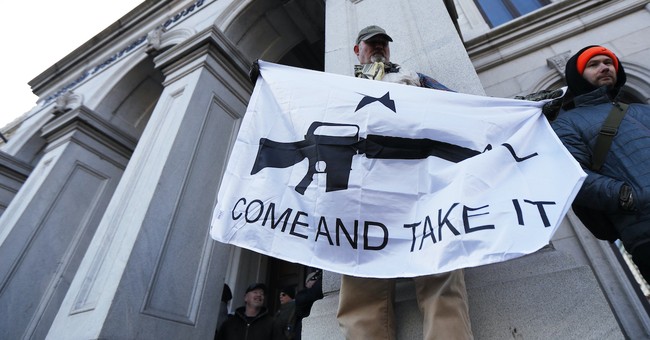 I get that people don’t like the idea of scumbags murdering kids. I don’t either, which is why I want criminals prosecuted and cops in schools. And I understand the appeal of a process to take away the guns from people we would all agree are bad but who have not yet actually gone and become felons or certifiable crazies. I have friends who argue for these laws, confident that our rights will be protected by due process.

But I do not share their faith; if the last few years has taught us anything it is not to put our trust in institutions to do their constitutional duty when it conflicts with their political preferences. But even if a fair process could be established, the idea of red flag laws is entirely based upon a flawed premise. The premise is that you can just take a right away because you think it’s a good idea. It’s hard to see the due process when someone being processed has done nothing wrong. That’s key – if they have done something wrong, there are already constitutionally sound ways to restrain them.

You don’t get to take people rights without convicting them of a crime, or showing they are nuts and need to be in the booby-hatch. There’s no special exception to the Constitution because ten invertebrate Republican senators want to “do something.” We already have well-established and constitutional ways of “doing something.” If someone is a convicted felon, he’s banned from having a gun. If someone is making threats, get a restraining order or, better yet, arrest him. If someone is crazy, then channel that old Van Halen album and 5150 him. But the Founders would look upon you if you told them “Hey, we think it’s cool to strip people of their sacred rights because someone complains about them and a judge is too scared to actually demand real evidence and risk letting him keep his rights,” and they would say, “Taketh ye head from inside your rear endeth, for thou art a fool.”

Red flag laws are ripe for abuse. You can tell because the left is slobbering to get them enacted. Do Dems arrest the myriad scumbags wandering the streets of Democrat cities? Do they prosecute them? No, and these animals commit an Uvalde every few days. If Dems cared about “gun crime,” they would arrest, charge, and lock-up gun criminals, but they don’t. They care about thought crimes – yours. These laws might be used to disarm a few nutballs, sure, but they will also be used against us when we dissent too much. We’ve seen how they use the power of government against political opponents like us – IRS targeting, FBI entrapment, selective prosecutions, to name a few – and why the hell would we give them a new weapon when they have abused the ones they already have in the service of the regime?

Oh, but see, there are police and judges who will ensure this is all done fairly and is never, ever, part of some political vendetta. Chet, my unicorn, is totally confident that the ruling caste will start respecting our rights as soon as we grant it this power to summarily take them away.

Why the hell would we ever put our civil rights in the hands of a dual track justice system where our train is always the one getting derailed? Gosh, in a society where meth enthusiast Hunter Biden poses with a gat and is not arrested, where Nancy Pelosi’s (understandably) drunk hubby walks away from a DUI accident scot free, where Trump supporters who were mostly peaceful languish in dungeons as judges rubber-stamp the flouting of their right to a speedy trial, where Peter Navarro gets chained up while Eric Holder does not, are we supposed to believe that we can rely on the justice system to treat us conservatives fairly when some lib complains to the Red Flag Forces that we are thinking unapproved thoughts?

Rick Rule: Commodities Just Re-Priced In A Way That Will Change Everything

HOW TO BRAINWASH CHILDREN AND SOCIETY INTO ACCEPTING AND NORMALIZING PEDOPHILIA