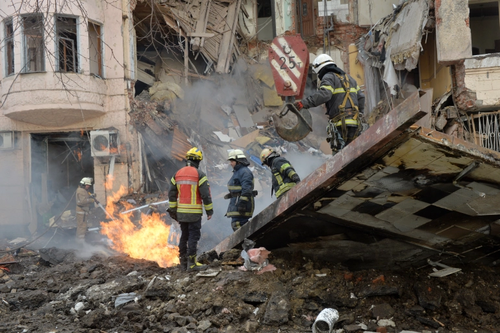 Now nearly four months into the Russian invasion, the Ukraine war has hit a grim milestone, with the United Nations on Friday issuing a new official number of known civilian casualties while warning that the true death toll is likely much higher.

The United Nations Office of the High Commissioner for Human Rights (OHCHR) said in its daily update that more than 10,000 civilians have been killed, including almost three hundred children.

“Most of the civilian casualties recorded were caused by the use of explosive weapons with a wide impact area, including shelling from heavy artillery and multiple launch rocket systems, and missile and air strikes,” the statement added.

The statement further noted that “OHCHR believes that the actual figures are considerably higher, as the receipt of information from some locations where intense hostilities have been going on has been delayed and many reports are still pending corroboration.”

The UN agency cited that widespread deaths have additionally been reported, but not confirmed given the impossibility or difficulty of access in Mariupol (Donetsk region), Izium (Kharkiv region), and Popasna (Luhansk region), where “there are allegations of numerous civilian casualties,” the statement said. Currently the heaviest fighting is located in the Donbas, and also in Ukraine’s south.

In fresh Sunday remarks Secretary-General Jens Stoltenberg reaffirmed the Western alliance’s commitment to arming Ukraine in hopes that it may eventually liberate Donbas, but underscored the costs may be high in a protracted conflict lasting for “years”.

“We must prepare for the fact that it could take years. We must not let up in supporting Ukraine,” the Nato chief underscored in an interview with Germany’s Bild newspaper.

“Even if the costs are high, not only for military support, also because of rising energy and food prices,” Stoltenberg added, at a moment populations from Italy to Germany to the United States are facing deep economic uncertainty amid soaring prices at the pump, supply shortages, and high food prices.

Why The Definition Of Inflation Matters