A former federal police officer calls BS on a photograph taken of members of the white nationalist hate group, Patriot Front who had their arms restrained and were made to kneel a few weeks ago when 31 of its members were arrested in Coeur d’Alene, Idaho, when they were discovered packed into the back of a U-Haul truck.

Widely derided on social media as a fake “front” comprised of federal assets and agents, the Patriot front is reportedly an offshoot of the Vanguard America hate group who organized the infamous 2017 Unite the Right rally in Charlottesville, which ended in bloodshed and violence.

On June 11th, all 31 were charged with criminal conspiracy to riot for allegedly planning to incite an uproar at an LGBTQ Pride event in Coeur d’Alene.

He says, “This is a false flag – a bullshit show. None of this coincides with law enforcement procedures for detaining an individual and searching an individual. Hopefully, none of y’all are falling for this stupid bullshit.”

He appears to think that this arrest was fictional theater to gin-up the Federal Government’s claim that “white supremacist domestic terrorists” are the gravest threat on American soil. 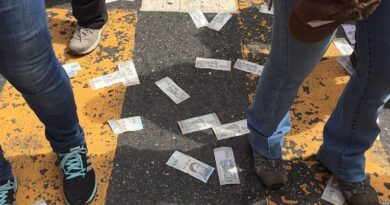 When Did Venezuelans Realize They Were Facing Hyperinflation?