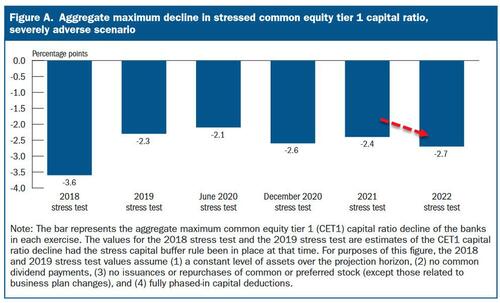 As we detailed last week, all 33 banks tested this year passed the stress test though we noted that in the test’s worst-case scenario, they would collectively lose more than $600 billion, the Fed said.

We note that this year, the biggest banks in the country, including JPMorgan Chase and Bank of America saw their capital levels fall further than last year on higher loan and trading losses ahead of their decisions today on what level of shareholder payback (dividends and buybacks) they would offer.

Some of the highlights so far:

Morgan Stanley shares are up 2% after hours…

Finally, we note that, ahead of the stress test, Cowen analyst Jaret Seiberg warned of potential pushback from lawmakers.

“The political risk today is that Capitol Hill questions why banks should distribute any capital if a recession is possible,” Seiberg said.

“We do not see that winning the day, but it could get attention.”

So, how long after these results are broadcast will Senator Warren be firing up her Twitter mob?