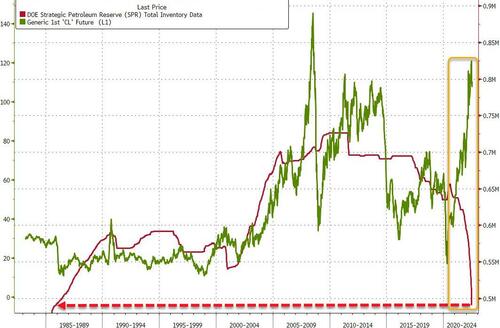 Continuing to do the same action and expecting different results is the Einsteinian definition of insanity… but that hasn’t stopped the Biden administration in the case of its attack of his oil/gas prices.

This morning, despite DOE’s servers being reportedly fried, they managed to report that the US released 6.9 million barrels of crude from its Strategic Petroleum Reserve (SPR) last week (~985,000 b/d).

As Bloomberg’s Javier Blas notes, the latest weekly release has pushed the SPR below the 500 million barrels mark for the first time since 1986…

And as the chart above shows, the plummeting SPR is not having the impact on prices that President Biden hoped (which explains why he is blaming everyone and everything else for the rise in gas prices – as it becomes clear it’s a refining capacity issue as much as anything else).

After last week’s discussions between The White House and energy executives, a number have spoken out to defend against the vitriolic attacks from Biden. However, Scott D. Sheffield, Chief Executive Officer of Pioneer Natural Resources, perhaps said it all best, concluding on the problems that the administration is going to face in dealing with a rapidly emptying SPR very soon…

Yeah, first of all, I think we’ve all seen the true behavior of the Biden administration when they came out — when he first came in office, they basically wanted to ban fracking, no federal leases and they’ve already shutdown gas infrastructure, moving gas across the Northeast down to the Gulf Coast. New York won’t take a pipeline, they’ve rejected several pipelines, they rather use fuel oil instead of natural gas in the state of New York.

So that’s been amazing to me and the rhetoric coming out of Secretary of Energy was go find another job in another industry versus the fossil fuel industry.

So all of a sudden, things are getting tight, gasoline is going up, we have a war in Ukraine and then the entire administration changes. But the rhetoric really hasn’t, you saw the argument between Mike Wirth and Biden.

So when I said we’re not going to add growth, he quoted me and used my name that some CEO basically said that they wouldn’t change your growth rate if oil was $200.

So in my opinion, relying on SPR and federal tax removing $0.18… those are band-aids. In my opinion, our inventory after six months SPR will be at the lowest in 40 years. So he is going to have to buy at a higher price and refill it in my opinion. And we’re going to be even shorter, and SPR will be half of what it was three years ago.“

Separately, as Biden heads to the Middle East to ask for help with his ratings, Reuters is reporting that of a conversation caught between French President Macron US President Biden.

“I had a call with MbZ,” Macron was heard telling U.S. President Joe Biden on the sidelines of the G7 summit

“He told me two things. I’m at a maximum, maximum (production capacity). This is what he claims. And then he said Saudis can increase by 150 (thousands barrels per day). Maybe a little bit more but they don’t have huge capacities,” Macron said.

In other words, no matter how much Biden begs, the two top OPEC oil producers – Saudi Arabia and UAE – can barely increase oil production.