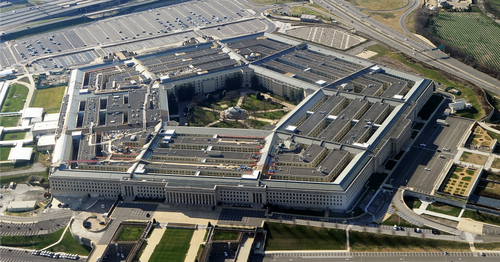 The Pentagon on Monday in a belated reaction to Russian President Putin’s Saturday announcement that Russia will be transferring nuclear-capable long missiles to Lukashenko’s Belarus slammed “cavalier” and “irresponsible” nuclear saber-rattling.

The US is apparently taking issue with Putin leaving open a nuclear transfer option, seen in the Saturday announcement alongside President Lukashenko as the two met in St. Petersburg: “In the coming months, we will transfer to Belarus Iskander-M tactical missile systems, which can use ballistic or cruise missiles, in their conventional and nuclear versions,” Putin had said.

In response, a senior defense official told reporters at a Monday briefing: “Certainly, any time anybody uses the word nuclear you have concerns. Quite honestly it seems pretty irresponsible of a national leader to talk about the employment of nuclear weapons and to do so in a generally cavalier fashion.”

Reuters wrote of the prior Russian announcement, “Russia will supply Belarus with Iskander-M missile systems, Russian President Vladimir Putin told a televised meeting with Belarusian President Alexander Lukashenko on Saturday. Delivery will take place within a few months, he added.”

Thus the Pentagon is taking the announced transfer of the Iskander missiles as another veiled nuclear threat, according to the US official:

“The way that statement read from Putin was, ‘Hey we’re going to give them Iskanders, and oh, by the way, they can hold nuclear weapons.’ And everybody takes that very seriously when you use that language,” the official said.

“Our strategic forces are always monitoring things in that regard,” they added.

Iskander-M operates on a mobile system, and is generally described as capable of a range of up to 300 miles – again which can include conventional or nuclear warheads.

Also on Monday, Russia stands accused of hitting a crowded Ukrainian shopping mall in the city of Kremenchuk with a cruise missile, leading to at least ten fatalities:

Amid growing accusations, Belarus has maintained that it has not been a direct participant in hostilities in Ukraine; however, it’s well-known to have played the role of a key hub of Russian logistics and support. In the past days, Ukrainian defense and intelligence officials have alleged that the Kremlin is actively trying to draw Belarus into the war on its side.

Kiev on Saturday said the northern Chernihiv region came under “massive bombardment” from rockets “fired from the territory of Belarus and from the air” in a major cross-border attack, which isn’t the first time the Ukrainians have leveled such a charge.