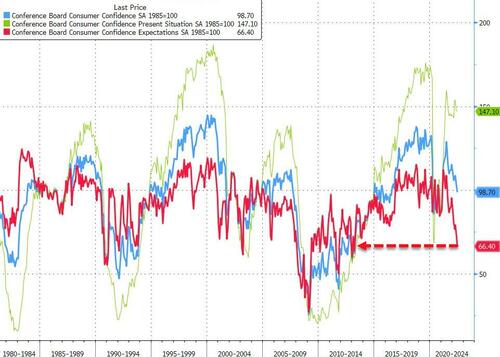 Following the crash (to record lows) of UMich Sentiment, analysts expected The Conference Board’s consumer confidence index to tumble in June. They were right but it was a considerably bigger miss with the headline falling to 98.7 from 103.2 (revised lower) and well below the 100.0 expected. This was largely driven by a collapse in ‘expectations’ from 73.7 to 66.4 (present situation confidence fell from 147.4 to 147.1)…

That is the weakest level for ‘hope’ in the future since 2013.

So that’s your average joe’ American, but your ‘average joe’ American business is also increasingly pessimistic as Richmond Fed’s Manufacturing confirms with a crash to COVID lockdown lows (printing -19 in June from -9, dramatically missing expectations of a small rebound to -7)

Under the hood, shipments and new orders collapsed and local business conditions were a bloodbath… with expectations for conditions in the future worsening notably.

Finally, we also note that for the first time since 2019, ‘soft’ survey data is below ‘hard’ real economic data…

‘Hope’ is getting hammered – almost a one way street lower since Biden was elected – now near its lowest since before Trump was elected.

(Reader: timjoebob) Response to Doc P about “Letter to the White Hat Team”

Hopkins: Revenge Of The Putin-Nazis!