Big Brother in Washington added Big Sister Harris and other Biden regime officials to eliminate what little remains of free and open society freedoms in the US — to be followed by pursuit of extinguishing its remnants worldwide.

According to a so-called White House “Fact Sheet” on June 16:

Unrelated to its alleged purpose, what’s going on is all about reviving the regime’s  Disinformation Governance Board (DGB) under a deceptive new name — a ministry of truth to eliminate what conflicts with the fabricated official narrative.

Other so-called “task force” members include the following rogue’s gallery of regime officials, figures hostile to free and open society truth-telling on domestic and geopolitical issues mattering most:

Homeland Security Secretary Alejandro Mayorkas, head of the nation’s Gestapo — along with the FBI, CIA and NSA, agencies dedicated to the eradication of freedom at home and worldwide.

Pharma-connected HHS Secretary, Xavier Becerra, and heads of other Biden regime agencies are also involved in the diabolical freedom-destroying scheme.

They and key underlings are dedicated to advancing tyrannical rule to full-blown status domestically and worldwide — including by adoption of more police state laws than already.

They want perpetual war on invented enemies waged to transform the world community of nations into subservient vassal states.

They want the vast majority of ordinary people worldwide exploited as powerless, obedient serfs — ones not eliminated by kill shots.

Hostile to societies safe and fit to live in, along with the rule of law US policymakers long ago abandoned, cognitively impaired demential Joe and his White House impersonator don’t give a hoot about the rights of ordinary people at home and abroad.

Nor do they care about gender-based violence, online harassment or related issues.

Their sole pursuit is accumulating maximum wealth, power and privilege at the expense of the vast majorityat home and abroad to be exploited, not served.

Progressive in name only, she’s been on the wrong side of history throughout her pockmarked public disservice career.

Instead of pursuing equal justice under law, she went the other way time and again in support of wealth, power and privilege over the rule of law.

Instead of seeking justice, she obstructed it to burnish her earlier prosecutorial record for advancement to higher office.

Trampling on the rights of ordinary people got her chosen as US senator, then illegitimate Biden regime vice president.

And now she’ll head the regime’s ministry of truth under its deceptive new name.

The new scheme is the old one under a new name because its original one aroused public outrage over the thinly-veiled plot to censor online truth-telling.

In her mid-June remarks about the diabolical scheme, Harris refrained from “us(ing) the term ‘disinformation.’ ”

She disguised the so-called task force’s intention to censor and suppress online truth-telling by declaring:

“(A)ll people deserve to use the internet free from fear (sic),” adding:

“We still have so much more work to do to protect people from online harassment and abuse, which is why the work of this task force is so important (sic).”

“(N)o one should have to endure abuse just because they are attempting to participate in society (sic).”

Harris and other Biden regime hardliners are serial abusers of ordinary people at home and abroad, as well as against nations on their target list for regime change.

Looking ahead, the so-called panel will devise ways to pursue and enforce what’s hostile to governance of, by and for everyone equitably, including the abolition of what little remains of speech, media and academic freedoms. 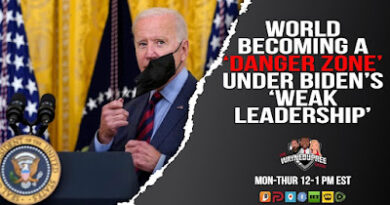 Takes Only ONE Weak U.S. President To Destroy A Nation’s Credibility And Ability To Function As A World Power And Biden Has Destroyed America On The World Stage In Just One Year

Facebook Wants To Know If You’ve Been Exposed to Extremism