“Airmageddon” is a nickname for one of the busiest travel weekends in the United States when thousands decide to hit the road. This year, some 42 million people will take a road trip and 3.5 million people are expected to fly, according to the AAA.

Hundreds of flights have been cancelled or delayed in the United States in the lead-up to the July 4 weekend travel havoc.

This Independent Day is expected to be the busiest in the US since the beginning of the pandemic, but many of those hitting the road might want to pack their patience. As of Sunday, over 700 flights had already been cancelled and more than 3,000 delayed. On Sunday alone, 181 flights were cancelled and 386 delayed, according to FlightAware.

Transportation Secretary Pete Buttigieg said that his department was “watching closely to see how airlines are meeting their responsibilities to get passengers where they need to go this weekend” on Friday. Two days later, the secretary shared a guide on how to get a refund if one’s flight is cancelled or delayed, meeting backlash over the lack of any further action from his office.

“My connecting flight got cancelled last night. At first, the airline offered 2500 miles, which I estimate is worth about 30 bucks. But I claimed the refund for the cancelled portion instead, and it worked out to be $112.07,” read one of Buttigieg’s tips on Twitter.

However, the advice does not seem to be too helpful.

In 2021, US airlines received $54 billion to keep the industry travel-ready and adequately staffed. Now, airfares cost around 14% more, with record-high inflation raining on the parade of US summer vacations… once again.

Airlines have blamed the Federal Aviation Administration (FAA) for massive travel disruption, asserting that its understaffing is responsible for “crippling” traffic along the East Coast. The FAA, in turn, claims that airlines implement schedules they physically cannot support. Additionally, outraged pilots have complained about excessive hours and flying times that could potentially be a safety issue.

According to CBS, the Department of Transportation is mulling imposing penalties on airlines that publish unrealistic schedules and introducing additional charges if an airline slates a fight during peak times of 8am – 5pm. Another initiative is to ask airlines to reschedule some of the flights to depart between 8pm and midnight due to fewer delays at night.

Amid “airmageddon”, the AAA has estimated that roughly 42 million people will take a road trip by car of 50 miles or more, which is also a post-pandemic record and comes despite record gas prices at the pumps.

“The volume of travellers we expect to see over Independence Day is a definite sign that summer travel is kicking into high gear,” said Paula Twidale, senior vice president of AAA Travel. “Earlier this year, we started seeing the demand for travel increase and it´s not tapering off.” 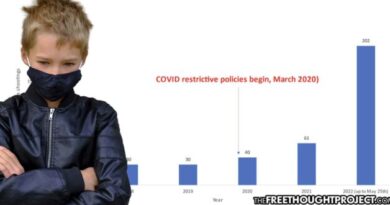 Is Violence Being Driven By Antidepressants?