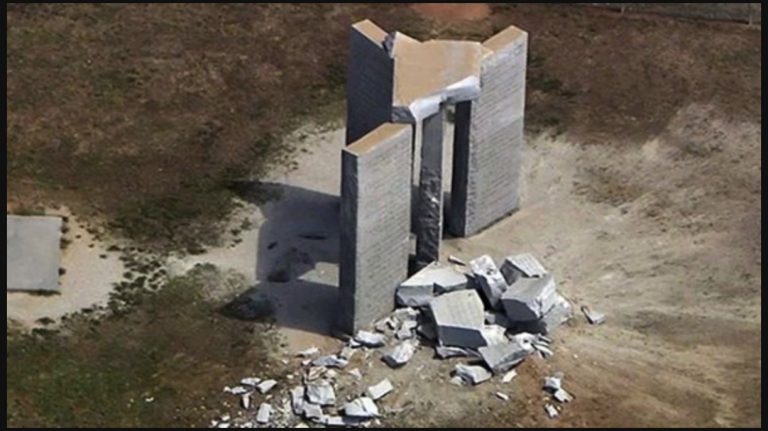 SOTN Editor’s Note: It ought to be quite obvious to everyone that there’s something very BIG going on—EVERYWHERE.  When the multi-millennial war on consciousness has broken out into the open as it has in 2022, you know the world — as we know — is about to change—BIG TIME!  The following article only captures some of the most dramatic events which recently occurred within a very short time span.  However, even more highly consequential events are about to transpire which will rock the planet as they cause earthquakes throughout the entire planetary civilization.  Be aware that humanity is about to enter the greatest period of creative destruction in world history.

The Georgia Guidestones are destroyed, UK Prime Minister Boris Johnson is forced to resign, the longest serving Japanese Prime Minister Shinzo Abe is allegedly assassinated, the head of OPEC suddenly dies at 63 with no explanation, angry mobs stormed the Columbo capital forcing the resignation of Sri Lanka’s second president in less than two months, and a quarter of Canada’s internet goes down for 19 hours. Every single one of these staggering world events all fatedly co-occurring within a 24-36 hour stretch from Thursday to Friday last week, can’t all be by pure coincidence. Noteworthy also – all these decisive global developments simultaneously unfolding worldwide went down while top G20 nations’ reps were bickering in Bali over the Russia-Ukraine conflict, Russian Foreign Minister Sergei Lavrov leaving early.

The escalating tempo of these major global events amidst the unprecedented backdrop of the greatest risk of nuclear world war annihilation in history, ongoing premeditated genocidal murder and maiming of millions from poison bioweapon non-vaccines, animal livestock culling, 100 food processing plants destroyed by fire arson, all to set the stage for unprecedented food and fuel shortages leading to famine and mass starvation, soaring highest gasoline and food prices ever, skyrocketing worldwide inflation, all timed with the complete collapse of the global economy and final death of the US dollar as the international currency exchange, all these earthshaking epochal developments are definitely not by accident but planned years in advance by the controllers benignly masquerading today as elites’ “Great Reset.” Tragically it’s being perpetrated the world over in order to bring life on planet earth to a total standstill, never so dangerously, precariously closer to utter, sheer disaster and destruction at the diabolical hands of a murderous elite intentionally orchestrating never before seen cataclysmic crises.

Let’s look at the final words just prior to the sudden, untimely death of OPEC (Organization of the Petroleum Exporting Countries) Secretary-General Mohammad Barkindo, three weeks from stepping down from his key 6-year international post as the planet’s most powerful energy organization:

Our industry is now facing huge challenges along multiple fronts and these threaten our investment potential now and in the longer term. To put it bluntly, the oil and gas industry is under siege.

In December 2018 for the first time in 75 years, the United States became a net oil exporter. But once imposter Biden took over in January 2021, his first day in office he revoked construction of the Keystone XL pipeline, and is now in the process of illegally depleting America’s strategic oil reserve, sending it to places like China. The Biden crime show has been demanding, then begging OPEC to boost production. OPEC’s answer: “if you want more oil, pump it yourself.” Meanwhile, UAE and Saudi leaders snubbed Uncle Joe, refusing to either take his calls or host his visit. Within just hours after the OPEC head’s final words making it clear that continued oil and gas development is absolutely essential over the long haul, amidst the elite’s rush for the world to run on alternative green fuel sources, the 63-year old Nigerian OPEC leader in previous good health suddenly wound up suspiciously dead.

After UN Secretary General Antonio Guterres and World Economic Forum’s Klaus Schwab signed a partnership agreement accelerating their draconian UN Agenda 2030, less than two months later in early July 2022, Guterres has the audacity to blame the “morally unacceptable” north versus south hemispheric divide in “inequality” for the “perfect storm of crises” that he and Schwab are blatantly guilty of causing in the first place. Additionally, Guterres bogusly blames Putin’s special military operation in Ukraine for diverting the much-needed global attention from such fake elite-sponsored crises as climate change and the global green agenda. Referring to the West as the northern latitude nations that both the UN and WEF are publicly aligned against Putin, while Guterres in effect appears to blast BRICS alliance nations including Iran, Argentina (whose economy minister abruptly resigned the same day of Guterres’ pronouncements), Saudi Arabia along with most Middle Eastern, Asian and African nations, all refusing to join the West’s anti-Russian sanction bandwagon and for the world’s lack of cohesion addressing what he and his elites deceitfully attribute the planet’s two most pressing crises – climate change and the “urgent” need for going green.

Overt coordinated actions of the powerful elite are presently waging an irrefutable depopulation war against humanity. Over the last few decades, countless eugenicists have openly called for this human culling, based on the wholly deceptive Malthusian overpopulation-depleted resources myth. In recent years, elite bloodlines owning the world’s two largest investment firms – BlackRock and Vanguard – own virtually all the Fortune 500 corporations including all six monopolizing corporate news/mass media outlets, a central banking cartel in control of international finance, and through widespread illegal bribery and blackmail owning and controlling all the top G20 governments on earth, a miniscule number within the near 7.9 billion total population has managed to consolidate its centralized power into fewer and fewer hands. Today’s globalist tyranny has been achieved through elites’ privatization and globalization from the 1980s to the present, outsourcing jobs and using hidden offshore bank accounts.

With the centralized staging of the fake COVID pandemic a proven fraud and its non-vaccines a proven genocidal bioweapon, clear evidence has emerged of an overreaching, authoritarian, technocratic totalitarian tyranny unprecedentedly gripping our planet like never before. A June 2022 Trilateral Commission Report states:

Climate change is perhaps the greatest challenge facing humanity in the 21st century,” and it “is primarily caused by the rise of fossil-fueled economies and related greenhouse gas emissions.

Using fear porn tactics of continual threat from manmade bioweapon pandemics in conjunction with the flimsy pretense of needing to rush through the new green agenda and worn-out global climate change excuse while increasingly facing criminal exposure of egregious atrocities worldwide, in a last ditch self-defense desperation ploy to retain its waning centralized power and control over the planet, elites have sped up their meticulously manufactured “perfect storm” of unending global crises and destabilizing upheaval for the diabolical purpose of then pretending to be our saviors offering security and survival in exchange for their formalized long-awaited wet dream of one world governance dominance and control.

But rather than focus on their doom and gloom agenda forcing humanity to its knees amidst so much of their death and destruction imposed on all earth inhabitants, this article will focus primarily on the worldwide awakening and pushback of freedom-loving citizens to actively oppose the power hungry parasites’ dystopian nightmare of feudal enslavement control through digitalized super surveillance, world bank digital currency and oppressive, deadly social credit scores. Major events from this last week alone illustrate the fact that coalescing counterforces are openly operating and fighting back with significant success. The critical mass needed to move from covert to overt collective action against the evil appears to finally be here.

While all these major breaking stories were happening, farmers have been openly rebelling in the Netherlands as the world’s second largest agricultural exporter, unwilling to accept the elite’s NWO green agenda that spells their demise. The incendiary trigger was ignited after a Dutch court order recently called for slashing by 50% all farming livestock’s nitrogen oxide and ammonia emissions by 2030, forcing one in every three Dutch farmers’ livelihood destroyed while decisively worsening the elites’ engineered global crime of severe food shortage and famine. But elites’ diabolical ploy is backfiring, and now in solidarity, courageous Dutch farmers have been joined by their fellow dock workers and in fact farmers across Europe protesting against globalist oppression.

The revolt against green tyranny is destined to spread worldwide similar to the worldwide mass protests and Canadian truckers’ movement erupting earlier this year over the vax kill mandates. The people are fighting back through civil disobedience and sheer power of a million to one odds, growing planetwide in a massive grassroots revolution defiantly challenging the centralized dictatorial authority’s antihuman lockdowns, mandates and digital ID passports, still being pushed by overreaching cabal puppets’ dirty bidding on behalf of their Luciferian elite masters. Digital enslavement will not be passively permitted as the used and abused world citizenry is finally waking up to the life and death stakes and as a result, are fast reaching critical mass opposing our common enemy in today’s epic war between good and evil.

Like the overpopulation and global warming myths, the green movement’s Agenda 2030 implemented by the United Nations, rigid European Union protocols and nefarious compromised Biden dictates, all by globalist controlled puppet design, demands drastic reduction of manmade greenhouse gases like CO2 and nitrogen emissions, crucial for both the plant world and production of fertilizer currently in dangerously short supply worldwide, thus the elites’ grand deception of “gotta go green” now to fight climate change is sinisterly, falsely driving in one fell swoop the earth’s entire diesel, fuel, fertilizer and food crises. The scam of both the new green energy deal and the proven climate change hoax is the earth controllers’ convenient false excuse to implement suicidal policies intended to destroy North America and Europe, including the so-called economic sanctions heaped on Putin as so-called punishment, all nefariously designed to further destabilize and ultimately collapse the West.

‘Was it the jabs?’: Republican lawmaker dies suddenly