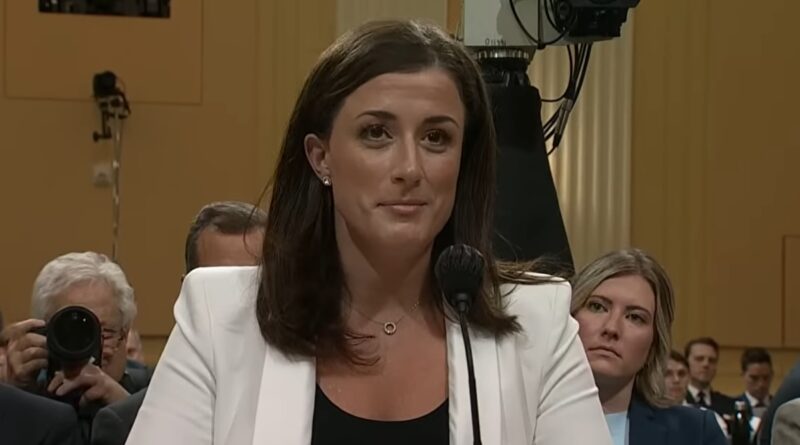 (Natural News) Cassidy Hutchinson, a former aide to then-White House Chief of Staff Mark Meadows, was billed as the January 6 Committee’s “star witness” some weeks ago when she appeared for prime-time hearings that had all the trappings of a Hollywood production.

She alleged that then-President Donald Trump got physical with his Secret Service detail, attempting to grab the wheel of “The Beast” — the presidential limo — in an attempt to force the driver to take him to the U.S. Capitol, where a false flag attack was taking place. She also claimed that she still “struggles to work through the emotions” of what happened on Jan. 6, adding: “As an American, I was disgusted. It was unpatriotic.”

“We were watching the Capitol building get defaced over a lie, and it was something that was really hard in that moment to digest,” she testified.

However, it was all a lie.

According to an exclusive report from The Federalist, newly revealed text messages purportedly from December 2020 through May 2021 reveal that Hutchison did not have a high opinion of the committee when she was first called on to provide testimony. The Federalist’s Mollie Hemingway and Tristan Justice note that the texts show Hutchinson spoke with other conservatives targeted by the Democrat-led Jan. 6 Committee and not in a flattering way.

She “commiserated with other targets of the probe about how little information she had about any wrongdoing that day, and lamented how corrupt the politicized committee was. Far from being upset with Trump, Hutchinson repeatedly spoke in favor of him and his presidency,” The Federalist noted.

Here is one example of the messages Hutchinson sent:

“I would rather shoot myself dead into the Potomac than see marine one flying around this city without 45 again,” Hutchinson wrote in one message nearly three months after the Capitol riot.

Below is another exchange she had with someone who has not been identified by The Federalist:

“Other than a handful of irrelevant texts, I have literally no documents or anything they’re asking about,” one ex-White House staffer texted her.

Of being subpoenaed in November, Hutchinson wrote, “we were [f—–] by Bennie Thompson,” the titular chair of the committee. She joked that he would be sending her to jail, and hoped that another friend would come visit her. In a text published by the Daily Caller earlier this month, Hutchinson called the panel’s probe “bs.”

Following her testimony, she and Rep. Liz Cheney (R-Wyoming), an anti-Trump Republican on her way to losing her primary next month, embraced, which was very unusual behavior between a committee co-chairperson claiming to be unbiased, and a witness. The embrace led to a glowing piece in The New York Times that said Hutchinson formed an “unlikely” bond with Cheney.

But Hutchinson wrote in September 2021 about Cheney and Rep. Adam Kinzinger of Illinois, the two anti-Trump “Republicans” on the Democrat-led Committee, per The Federalist:

Hutchinson disparaged Cheney and Illinois Rep. Adam Kinzinger, the two Republicans hand-picked to serve on the committee by Pelosi, as a “crop of losers.” Discussing how other anti-Trump extremists had declined to run for re-election rather than face certain defeat at the hands of Republican voters, Hutchinson said she didn’t think Kinzinger or Cheney would take that approach because “Their egos are too [f——] big.”

She mocked their self-conception as “The REPUBLICAN MARTYRS.”

“I think Liz being the ‘future of the GOP’ is a massive stretch,” Hutchinson wrote in one string of messages just two months before her appearance. “I think she does have the power to cement the anti-Trump, RINO movement and really capitalize off it on a national scale. She’ll never ever turn the tides in her favor. Ever.”

“Even if Trump were to fall off the face of the Earth, her neocon policies are not where the base’s ideological politics currently are nor will head,” she noted further. Still, she conceded that Cheney’s hatred of Trump had tremendous sway thanks to corporate media’s amplification and assistance. “But I do think this maneuver is by consequence ‘future-shifting’ for the GOP in that she does have the power of the media, the determination, and the cut-throat mentality to capitalize off this.”

Nothing that happens in Washington is as it seems. Literally nothing.