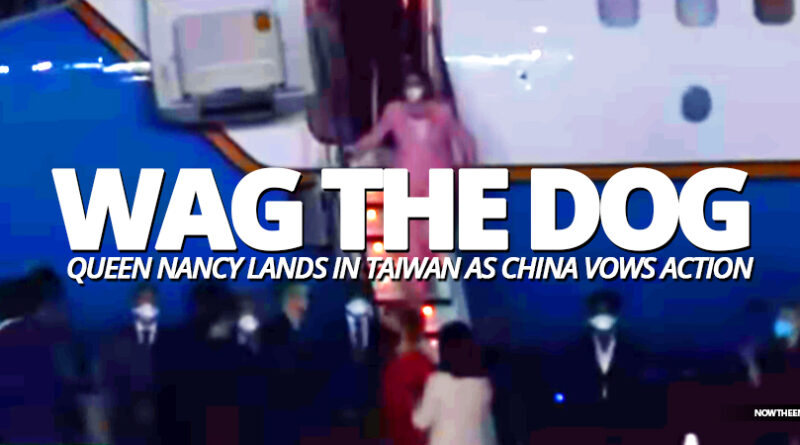 House Speaker Nancy Pelosi arrived in Taiwan late Tuesday, defying Chinese warnings against visiting the self-ruled island that Beijing claims as its territory and setting the stage for a sharp escalation in tensions between China and the United States.

History shows us that the best way to get a nation out of recession is to get into a war, that usually works to invigorate the economy. History also shows us that when one political party is facing historic defeat at the voting booth, a war is usually the cure for that as well. The Democrats in Washington DC are right now attempting to solve both those problems by sending that ‘champion of freedom’ Nancy Pelosi to Taiwan in hopes of eliciting military action from China. Ever watch the movie ‘Wag The Dog’? You should.

Of course, seeing that this is Day 869 of 15 Days To Flatten The Curve, everything is “on the table”, and what we are watching could easily be the start of something really big. Imagine for a moment, the New World Order issuing the order to make Nancy Pelosi not just a ‘champion of freedom’ but also a patron saint of the American people by turning her into a martyr. They did it to JFK in 1963, drastically changing the fortunes of the Democratic Party from that day until now. Whatever actually happens, just remember you are watching end times theater, fake, stage events but with grisly real world consequences. China says military action is coming, let’s see who blinks first, and in the meantime, enjoy the show!

FROM MSN: Pelosi’s plane landed at Songshan airport in Taipei just before 11 p.m. local time. Wearing a face mask, she was greeted by Taiwan’s foreign minister, Joseph Wu, and staff from the American Institute in Taiwan (AIT), the de facto U.S. embassy in Taipei.

Pelosi’s visit has enraged China, which for years has sought to diplomatically isolate the island and views such exchanges with high-level foreign dignitaries as support for Taiwanese independence. The Chinese Communist Party claims Taiwan, a self-governing democracy that is home to 23 million people, as its territory despite never having ruled it. Chinese leader Xi Jinping has pledged to “reunify” Taiwan with China by force if necessary.

Moscow said it was “absolutely in solidarity with China”, calling the prospect of a Pelosi visit “pure provocation”.

“Our visit is one of several Congressional delegations to Taiwan — and it in no way contradicts longstanding United States policy, guided by the Taiwan Relations Act of 1979, U.S.-China Joint Communiques and the Six Assurances. The United States continues to oppose unilateral efforts to change the status quo.”

Chinese maritime authorities, meanwhile, announced additional military exercises in the South China Sea and live-fire drills in the Bohai Sea, near the Korean Peninsula, this week. Reuters, citing an unnamed source, reported that Chinese fighter jets on Tuesday flew close to the median line of the Taiwan Strait, the unofficial military boundary. Chinese carrier Xiamen Airlines, meanwhile, announced disruptions to at least 30 flights because of air traffic restrictions in Fujian, the Chinese province directly across the strait from Taiwan.

Hua Chunying, a spokeswoman for the Chinese Foreign Ministry, accused the United States on Tuesday of escalating tensions in the Taiwan Strait and warned of “disastrous consequences” if the United States mishandles the situation. “The United States should and must take full responsibility for this,” she said.