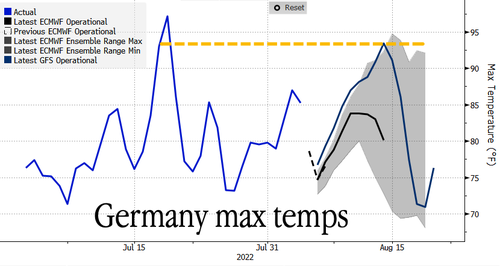 Above-average temperatures throughout Germany are pushing power prices to new records as utilities reduce electricity output in western Europe amid the worst energy crisis in decades.

National forecaster Deutscher Wetterdienst predicted a heatwave would persist through mid-August. Weather models show max temperatures will jump to mid-July levels of nearly 95 degrees Fahrenheit by Aug. 14, then slide to the low/mid 70s shortly after.

A confluence of factors is pushing German electricity prices to new records. First are the rising costs of imported nuclear power from France and Switzerland. Utilities in both countries report nuclear generation output has been reduced in recent weeks for various reasons, some of which are related to the heat (read: here). Domestically, Germany’s Uniper SE, the country’s largest utility, warned lower river Rhine levels made it more challenging to receive coal shipments via barges to fuel coal-fired power plants.

Reduced power generation is creating tighter European power markets that have sent German electricity prices for next year to a new record high of 413 euros per megawatt-hour on the European Energy Exchange on Friday.

Extreme heat and a reduction in power generation come as Europe suffers the worst energy crunch in decades thanks to Western sanctions against Russia, which has reduced the Nord Stream 1 pipeline capacity of natural gas to the continent to only 20%. This has forced some German utilities to switch over NatGas-fired generation to coal and diesel and heating oil generation — causing another crisis this week: Austrian oil and gas firm OMV AG halted crude product deliveries from storage facilities in Germany amid a “run” on supplies.

A consequence of the energy crisis will only mean electricity bills are set to rise even further.

Customers of Germany’s EnBW will see an average of 31.1% increase in electricity bills from Oct. 1 due to utilities pushing along soaring energy costs to end users, Reuters said.

… and it’s not even winter yet as some believe the power crisis in Germany and across the continent will intensify due to the lack of energy supplies.

US Retail Sales Unexpectedly Tumble In May