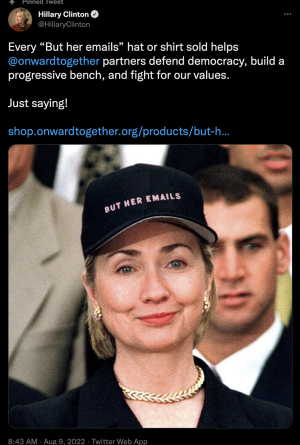 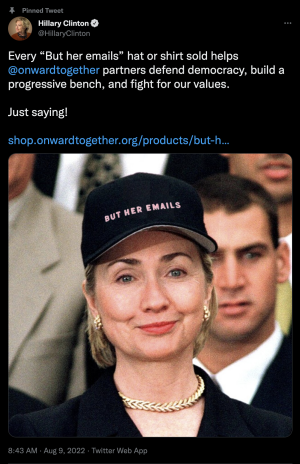 Hillary Clinton is using the tyrannical Mar-a-Lago raid to sell merchandise. Clinton began promoting “but her emails” clothing only a day after Trump’s personal residence was stormed. That seems to be a quick turnaround time considering everyone claims the raid blindsided them. She is blatantly bragging that intelligence agencies never came after her in any meaningful way. This would be akin to Hunter Biden selling “but his laptop” hats to laugh that he is above the law.

Could you imagine if Trump had the Clintons’ personal residence raided? The media and liberal mobs would have started a civil war.

In fact, “civil war” is now trending on Twitter as people fear the Democrats are only willing to leave office on a scorched Earth premise. The negative reaction was not what the White House expected, and now they are pretending that Joe Biden had no knowledge of the raid.

“Look, I’ll say this: the president and the White House learned about this FBI search from public reports,” she said. “We learned just like the American public did yesterday, and we did not have advanced notice of this activity,” Press Secretary Jean-Pierre claimed. 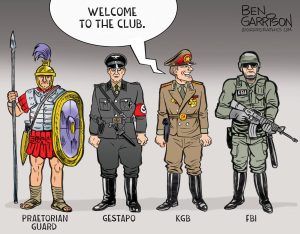 If that were true, the Department of Justice and Federal Bureau of Investigations would have acted independently, meaning they have gone rogue and report to no one. US Attorney General Merrick Garland would face indictment charges for failing to notify the president of the raid. The White House knew about the attack and deliberately carried it out because they are terrified of Trump running in 2024.

Donald Trump claims that his lawyers were not permitted to watch the search and believes false evidence may have been planted. There has never been such a raid on a former president. Donald’s son Eric said he hopes the invasion will prompt his dad to run in the next election. “They are threatened by Donald J. Trump, and honestly, I hope — and I’m saying this for the first time — I hope he goes out and beats these guys again, because honestly, this country can’t survive this nonsense,” Eric Trump stated. The left is waging a war against the right on all fronts, and this will not end nicely.

“WHO GAVE THE WARRANT!” Rand Paul EXPLODES on FBI Director Wray in Congress 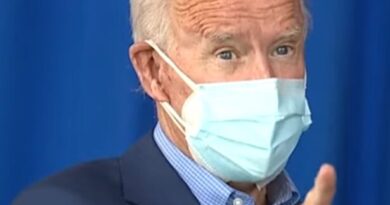 THE DEATH OF THE OLD GUARD IS NIGH! THIS AWAKENING IS POWERFUL! PRAY!