Dr. Anthony Fauci announced on Monday that he will be stepping down from his positions as director of NIAID and Chief of the NIAID laboratory of immunoregulation.

The 81-year-old Fauci leave government service in December after more than 50 years.

He will also be stepping down from his position of chief medical adviser to President Biden.

“I am moving from my current positions, I am not retiring,” Fauci said in a statement.

In a Sunday evening interview, Fauci said he was “not retiring in the classic sense,” and would devote himself to a (undoubtedly profitable) circuit of traveling, writing and encouraging young people to enter government service.

While he has been working on a memoir, Dr. Fauci said he did not yet have a publisher. In an interview last year, he said he was precluded from contracting with a publisher while he was still employed by the government.

In a Monday statement, President Biden thanked Fauci, who he called a “dedicated public servant and a steady hand with wisdom and insight,” adding “Because of Dr. Fauci’s many contributions to public health, lives here in the United States and around the world have been saved.”

News of Fauci’s retirement comes as the US Covid response comes under harsh scrutiny from GOP lawmakers, who have vowed to ramp up probes if they regain the house and/or Senate in November’s Midterm elections.

Fauci’s resignation will not prevent a full-throated investigation into the origins of the pandemic. He will be asked to testify under oath regarding any discussions he participated in concerning the lab leak.

Notably, as the head of the National Institute of Allergy and Infectious Diseases, he funded risky gain-of-function research at a Chinese lab aimed at making bat coronavirus transmissible to humans.

According to Sen. Rand Paul (R-KY), if the GOP wins and he’s once again elected, “I will be chairman of a committee in the Senate. We will use the subpoena power to bring forth all the records.”

“Right now they send us records. If we ask about their discussions, covering up where the virus came from, its origins in the lab, they white it all out,” Paul continued, referring to Democrats in power.

“They redact all the information and send us a blank piece of paper and they won’t tell us about their conversations,” the Senator further urged, adding that if power transfers back to Republicans, “We’ll get to the root of everything.”

The Senator predicted that Fauci would ‘immediately’ retire if midterms benefit Republicans, which he said would be the “best thing right there for the country because he’s been so damaging.”

“All these blue state governors listen to him and think that it’s science to close a restaurant at 10 o’clock at night or to say that we have to have 25 percent of patrons,” The Senator explained, adding “There’s no evidence that any of the mitigation, any of the rules, and mandates changed the trajectory of the virus at all.”

Paul has also warned that thousands of Americans are dying from COVID every month because Fauci is obsessed with pushing vaccines in place of therapeutic treatments that are effective in treating the virus.

FAUCI YESTERDAY: “I didn’t recommend locking anything down.”

FAUCI IN OCTOBER 2020: “I recommended to the president that we shut the country down.” pic.twitter.com/lvw59IBndA

More recently, Fauci was booed by crowds while throwing out the first pitch at a Seattle Mariners game in the far-left city.

He was also criticized by doctors for saying COVID vaccines induce “only temporary” menstrual irregularities, and has of course come under fire for his involvement in funding Covid experiments.

Anthony Fauci is stepping down to spend some more time with his bats. 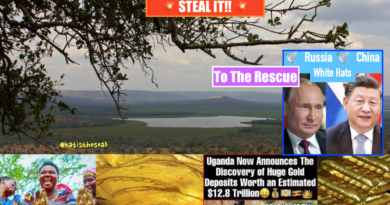 BOMBSHELLS! Russia, United States, China: They are ALL HIDING the Truth w/ Dave Hodges (1of2)

It’s gross to live under the US Empire