The size of North America’s upcoming crop harvest will have a meaningful impact on global supplies next year. Early signs from the US crop tour revealed that menacing heatwaves and drought this summer had damaged corn and soybean yields.

Corn futures in Chicago rose to a six-week high on Tuesday as crop tours show much of the Western crop belt is plagued with drought conditions, especially in parts of Nebraska and South Dakota where plants aren’t producing ears of grain.

Both corn and soybeans were below average at the initial stops in South Dakota on the western leg of the four-day Pro Farmer Midwest Crop Tour. Corn yield potential was estimated at 118.6 bushels per acre, well below the three-year average of 161.8 bushels. Soybean pod counts stood at 792.5, below the 1,073 average. Some corn fields had been cut for silage, a sign of a poor-quality crop. — Bloomberg

One Minnesota farmer and crop scout warned of the apocalyptic state of farmland while on tour:

A first for me and my counterparts. Herman, NE. No ears. #pftour22 pic.twitter.com/86TVY2yO6p

Made it through South Dakota. This crop has felt the stress long before pollination. Some stalks didn’t even try to put on ears. #pftour22 near Yankton, SD. pic.twitter.com/XpTl1lmxgS

Blackford County Indiana. Quite dry here and it shows on the crops for the #pftour22 pic.twitter.com/HoSQntR2dK

Global ag traders are closely watching the US growing season to understand future harvest to see if it can produce enough corn and soybean to replenish dwindling supplies due to the Ukrainian war and drought across Europe and China.

Crop scouts are forecasting yields lower than what the USDA is predicting.

In the second half of the week, the crop scouts will inspect farmland across Illinois, Indiana, Iowa, Nebraska, and Minnesota.

“There’s been so much heat and extremes this growing season, I don’t think the story is over about potential yield declines,” Kevin McNew, chief economist at agriculture-technology firm Farmers Business Network, said.

Nationally, USDA estimates that 55% of US corn is in good or excellent shape, down from 60% last year. The concerning factor is the farmland affected by disasters, including drought and flooding — has more than tripled from last year to 6.4 million acres.

“The evolution of crop conditions remains an important element to follow, especially as the counts in the US fields show a lower yield potential than last year,” farm adviser Agritel told clients in a note.

With Europen crops damaged by summerlong heatwaves and Argentina hit by drought, an underwhelming size of North America’s crops could result in shortfalls globally next year. 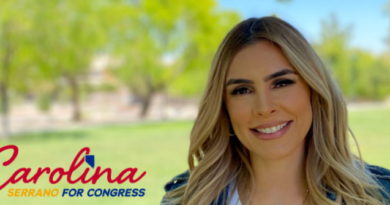 Exclusive—Republican Carolina Serrano: Nevada Is ‘Not a Liberal State’