The Ukrainian/NATO forces organized a counter attack in the Kharkov region in the north of Ukraine with the help of NATO ground forces. We estimate 14,000 mercenaries were involved in the assault of which 20% were Ukrainian. The remainder of the force was largely comprised of Pollacks and the residual comprising Americans, Canadians and Australians. These forces crossed over into Ukraine from Poland during the night, we found ourselves fighting 5 to 1. Following their counteroffensive, the RF air-force (helicopters) went in during the night and destroyed four Ukrainian/NATO military columns. Based on our drone intelligence the enemy lost at least 150 pieces of military armored equipment. We have managed to straightened out the frontline.

The Russian defense has taken out about half of these mercenaries and continues to take down more, the NATO/Ukrainian forces are taking heavy causalities. Yes, we had to regroup and yes, they managed to cover some ground, but they did not manage to overrun any of our fortified areas and the RF has subsequently taken back at least 16 towns within 24 hours. Some of the towns claimed to have been taken by the Ukrainians were not, in other towns there is ongoing fighting. It’s important to note that the majority of the locals had vacated these areas. The Ukrainian/NATO force attempted to encircle our troops but failed exhausting themselves in the process. We believe that the Ukrainian/NATO forces intention was to invade Belgorod a city located within Russia. Our BUK-2M are taking out howitzer launched shells with relative ease, providing some protection for our forces.

There is much hype in western media about the Ukrainian forces taking a back a large chunk of Kharkov, if you can believe them either 3000 or 6000 klm’s square was acquired in 24 hours.  That’s like capturing a third of Australia overnight straight after sneaking across the border, doesn’t make a lot of sense. I estimate that they managed to puncture the front line by about 51klm with varying degrees of success.

The NATO forces no longer hide their military activities in the Ukraine and now wear their own colors. NATO westerners are generally operating the imported heavy artillery such as the howitzers which are being guided by American satellites. The Germans continue to pump lethal weapons into Ukraine we consider that the Germans have entered into the war on the 12.09.22 and fight for Ukraine. In response Russia has stopped supplying all hydrocarbons (gas) to the EU and bombed much of Ukraine’s energy infrastructure. Ukraine was plunged into darkness for at least 20 hours. I read an interesting article the other day where an American news outlet stated that the Russian/China combined force is taking out American satellites.

The supply routes to Odessa have been cut, Nikolaevka has been heavily shelled and Odessa has taken heavy fire and is now primed to be taken. We have terminated approximately 2500 Ukrainian militants in the region this week alone, this number does not allow for the wounded. All military targets within the Odessa ports have been eliminated, the ports have come to a standstill.

The message is don’t believe what the western media tells you. Much of it is based on lies and half-truths, they almost never give you the full story about anything.

The war has commenced in earnest. 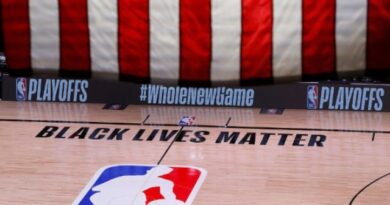 “When I Hear America First, that Scares Me”: NBA Coach Uses Training Camp to Indoctrinate Players in Radical Leftist Ideology