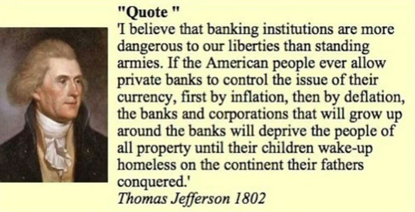 The current stock market crash has the potential to extend to a 30% fall in the next few weeks on the way to a 90% fall in coming years.

That the Dark Years would be coming has been clear to me for many years. The Dark Years are the very unpleasant antidote to a fake monetary and financial system which was doomed to fail the day it was created in 1913 when the Fed was founded.

Thomas Jefferson must be turning in his grave, as he foresaw over 200 years ago what will happen next.

The Fed is controlled by private banks and exists for their benefit solely. The fact that the Fed has an official raison d’être to control inflation and maintain full employment is just to please the politicians.

The Fed was always intended for the benefit of the bankers since the day it was conceived in 1910 on Jekyll Island.

The illusion that the Fed can control inflation and employment is total nonsense. It has as little credibility as if they would control the temperature of earth.

In my working lifetime of over 50 years, I have seen official US inflation go from 5% to 15%, down to negative and now 9%. For over 10 years the Fed tried to get inflation up to 2% but failed. And now it is 9% and rising and they will have ZERO chance to get it down to 2% for years.

So the Fed has failed abysmally to control inflation. And just as Jefferson said, inflation will lead to Hyperinflation before the monetary system collapses into a deflationary depression.

As the paper currencies finish the journey to ZERO in the next few years, ordinary people will face poverty, hunger and misery as the world economy implodes.

Gold (and silver) will clearly not make a bankrupt world solvent but in times of crisis it has always been real money and a saviour for the people who hold it.

I am clearly putting my head on the block here because like with most forecasts, the timing of my predictions contained errors. But we must remember that protecting risk is more important than being right on timing.

Here is an extract from the 2009 article:

In this newsletter we will outline what is likely to be the devastating effect of the credit bubbles, government money printing and of the disastrous actions that governments are taking. Starting in the next 6 months ….,  the world will experience a series of tumultuous events which will be life changing for most people in the world. It will be the start of a long period of economic, political and social upheaval that could last for a couple of decades.

We will discuss the three areas that we for some time have argued will determine the fate of the world for the foreseeable future, namely the coming unemployment explosion, the next and much more serious phase in the credit markets and finally the likely hyperinflationary or just inflationary effect this will have on the world economy and investments.

So the above is an extract from my original 2009 article about the Dark Years.  Here again is a link to the whole article: “Dark Years Are Here”

It has taken the world longer than I expected to reach the point when the global house of cards implodes. But a lot of the events described in the original article are now falling into position.

With Germany Kaput (broken) and the Mediterranean countries Bankrupt, we are witnessing not just the demise of the EU, but of  Europe as a whole. The UK, which is the only major European economy outside of the EU can clearly not prosper in splendid isolation.

Real knowledge is to know
the extent one’s ignorance
– Confucius

With the current total dearth of statesmanship in the West, the leaders don’t only lack “knowledge of their ignorance”.  The real problem is that they also lack knowledge and  wisdom as well as any understanding of history.

It would have been enough if just one of the leaders had even one of these virtues but sadly they don’t and therefore Europe is now on the road to perdition.

But let’s not blame the leaders for the upcoming turn of the economic cycle. They are all instruments of their time and countries get the leaders they deserve.

As the world is coming to the end of a major economic cycle, brilliant and strong leaders would be a total waste. They appear at the beginning of economic cycles or upturns and not at the end.

As we approach the collapse of the global economy, with the worst combination of economic, financial and moral bankruptcy as well as decadence, the leaders will by definition be morally bankrupt and impotent.

And that is exactly what the world is facing today. So sadly there is ZERO hope of a solution to the economic and financial Armageddon.

Armageddon (book of Revelation) can be defined as the final battle between the forces of good and evil. If my predictions are correct, it will be the forces of evil that win this time.

There is absolutely no other possible outcome to the predicament the world is currently in.

But remember this is not the end of the world. It is the end of a major cycle. It could be a 300 year cycle or a 2000 year cycle. Only future historians will tell the world the magnitude and duration of the coming downturn.

THE DARK YEARS ARE STARTING

The economic situation in Europe will deteriorate dramatically this autumn. Germany is on the way to insolvency. She was the economic engine of Europe but has now had a fatal engine failure.

As I outlined in my recent article No Electricity, No Money, Little Food – Misery, the combination of Germany’s disastrous energy policy with total dependence on Russia and then through sanctions to cut off the hands that feeds it is the height of lunacy.

In Merkel Germany had the perfect leader to destroy the German economy and industry. Shutting down nuclear energy and coal production without understanding the consequences was clearly not just insane but also totally unforgivable.

Add to that a rapid ageing population (and very low fertility rate, the German demographics are the worst in Europe). Also, opening up the borders for unlimited immigration without the capacity to take care of the immigrants is clearly irresponsible. But as I have pointed out, at the end of an era incompetent leaders are elected to fulfil the inevitable demise of a nation.

The Mediterranean EU countries of Greece, Italy and Spain are already insolvent and can no longer be financed by a rapidly weakening Germany.

Governments lie and so do central bankers. They produce fake figures and manipulate every part of the economy, but a country’s national currency is much more difficult to manipulate. Therefore if you want the truth about a country’s economy, just watch its currency.

Switzerland is by far the strongest country economically in Europe and probably in the world which their currency proves.

When I started working in Swiss banking in 1969, the dollar bought 4.30 Swiss francs. Today it buys 0.97 Swiss francs. Thus since 1969 the mighty dollar has lost 78% against the Swissy.

THE US – A BANANA REPUBLIC

The US clearly believe in its own rhetoric but it is quite incomprehensible that central banks around the world are not more concerned that they are forced to hold their reserve assets in a banana republic currency.

So the Swiss franc tells us about a strong and well managed Swiss economy.

Still nothing tells the truth better than gold. Since 1971 when Nixon closed the gold window, the only money which has maintained its purchasing power is of course gold.

That is not a surprise to the few of us who know that the US miracle economy is solely based on hocus pocus money which comes out of a printing press.

The US economy is the biggest in the world due to a Ponzi scheme that for over 50 years created illusional wealth based on fake money.

As the graph above shows, it took the US 200 years to grow debt from ZERO to $1.7 trillion. But in a desperate attempt to avoid financial misery and buy votes, the printing presses were cranked up to supersonic speed in the last 50 years. This led to debt growing 54X in the last 50 years from $1.7t to $92t.

And Jefferson saw it all coming over 200 years ago!

A country which hasn’t had more than a handful of budget surpluses since the early 1930s and is expanding debt exponentially, now at a super-exponential rate, is doomed to produce the mother of all bankruptcies which will spread around the world as an uncontrollable wildfire.

I just saw a television programme about Venezuela’s and Guyana’s economies. In a village shop in Guyana, everything was priced in fractions of gold, food, outboard engines, fishing tackle etc.

There were no prices in Guyana dollars or Bitcoin. And on the other side of the river in Venezuela, nobody wanted bolivars. Again gold was the preferred money but the dollar was also accepted (but probably not for long).

As the graph above shows, all major currencies have lost 97-99% in real terms – Gold – since 1971. Most of the remaining 1-3% fall will happen in the next few years as the world economy collapses in a series of debt defaults.

As the European, US, Chinese, Japanese and emerging markets economies implode, their currencies will go the same way as the Guyana dollar, Bolivar, the Argentina Pesos, Zimbabwe dollar etc.

This process is not sensational scare mongering since this is what has happened to every single currency in history. We must remember that no money except for gold and silver has ever survived.

MSM Feature Fiction Over Facts on All Things Russia and Ukraine 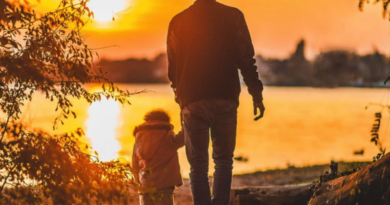 Some Reflections On Fatherhood In America