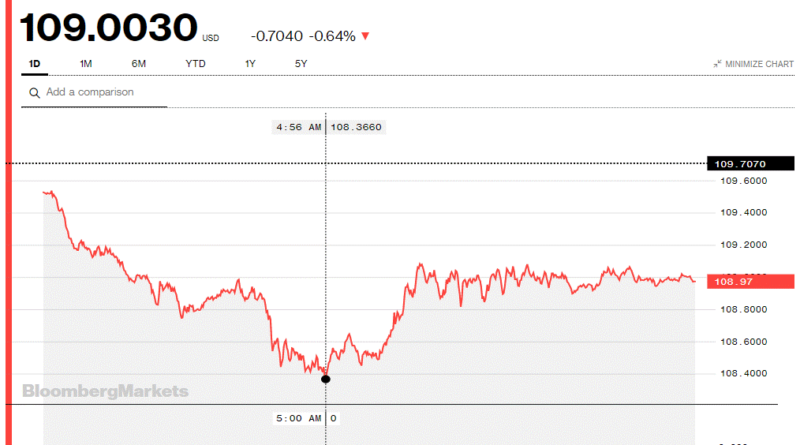 The gold price began to rally quietly and a bit unevenly from the 6:00 p.m. open in New York on Thursday evening, until 1 p.m. China Standard Time in GLOBEX trading on their Friday morning — and after getting sold lower for about an hour, it rallied rather smartly until it ran into ‘something’ around 8:30 a.m. in London. Its attempts to rally from there were firmly turned lower multiple times, until even more resolute selling appeared minutes before 1 p.m. in London/8 a.m. in New York. Gold’s low in New York was set exactly at the 10 a.m. EDT afternoon gold fix in London, right on the button — and its ensuing rally was capped and turned lower at precisely 1 p.m. EDT. The sell-off from there lasted until around 2:45 p.m. in after-hours trading — and it chopped a bit higher from there until the market closed at 5:00 p.m. EDT.

Gold was closed on Friday afternoon in New York at $1,717.10 spot, up $8.20 on the day — and about 13 bucks off its Kitco-recorded high tick. Gross gold volume in October and December combined was nothing really special at 159,000 contracts — and there was 5,000 contracts worth of roll-over/switch volume on top of that, with almost all going into the New Year. 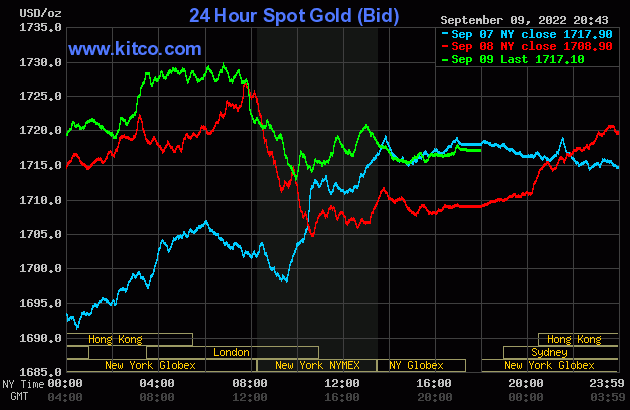 Silver’s price path in GLOBEX trading in the overseas markets was virtually the same as gold’s, with its high tick of the day coming around 9:45 a.m. in London. From there it was sold lower until its low tick was set at precisely 9:30 a.m. in New York…the open of the equity markets. Its ensuing rally was capped at exactly 1 p.m. EDT…the same as gold — and it then had a quiet but somewhat uneven down/up move until trading ended at 5:00 p.m. EDT.

The low and high ticks in silver were reported by the CME Group as $18.445 and $18.86 in the December contract. The September/December price spread differential in silver at the close yesterday in New York was 10.9 cents — and December/March was 13.4 cents an ounce.

Silver was closed in New York on Friday afternoon at $18.835 spot, up 31 cents on the day and about a dime below its Kitco-recorded low tick. Net volume was nothing special at around 42,300 contracts — and there was a bit over 2,300 contracts worth of roll-over/switch volume in this precious metal… mostly into the New Year as well.

There’s a premium of 17 cents an ounce in the spot month over September futures. This premium amount — and higher, has existed for at least ten days now — and is something that Ted has said that he’s never seen before. But it just screams of tightness in the good delivery bar market. 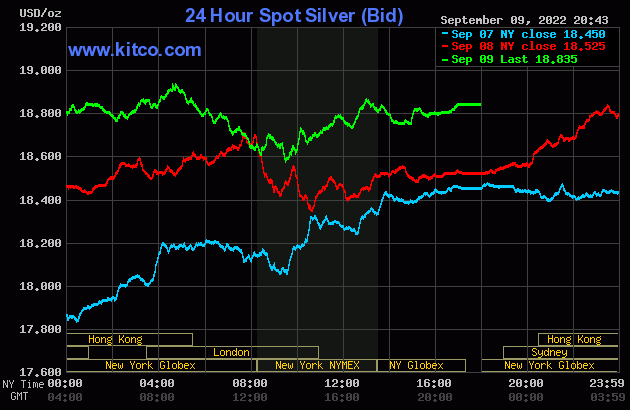 The platinum price crept/stair stepped its way very quietly higher until it also ran into ‘something’ around 10:25 a.m. CEST in GLOBEX trading in Zurich. From that juncture it was sold equally quietly and unevenly lower until the market closed at 5:00 p.m. EDT in New York. Platinum was closed at $878 spot, down 2 bucks on the day. 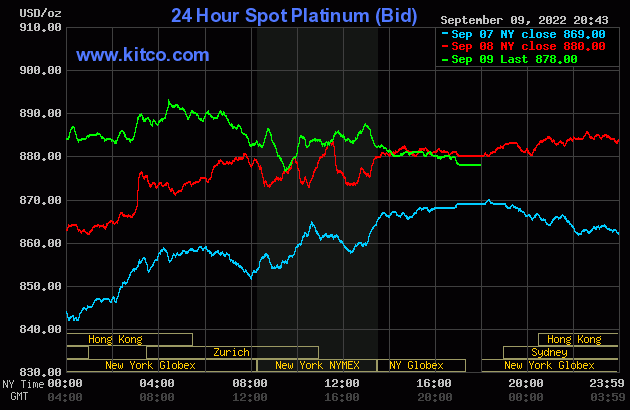 The palladium price began to head lower starting around 9 a.m. China Standard Time on their Friday morning in GLOBEX trading — and its low appears to have been set at noon CST. It stair-stepped its way smartly higher from there until it topped out around 12:40 p.m. CEST in Zurich. It, like silver, was then sold lower until the equity markets opened in New York — and from that point it crawled quietly higher until the COMEX close. It was then sold lower for a bit in the very thinly-traded after-hours market — — and didn’t do a thing after that. Palladium was closed at $2,107 spot, up 37 dollars from Thursday. 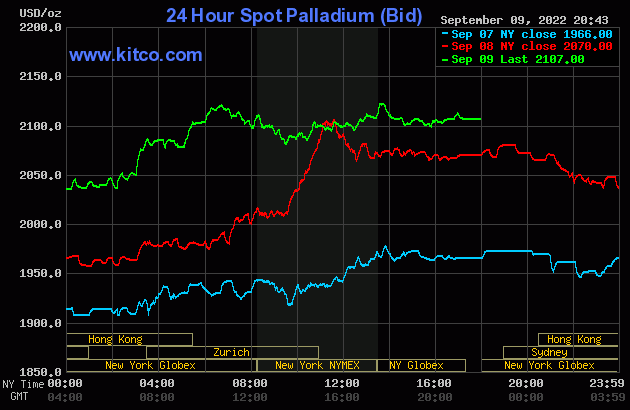 Based on the kitco.com spot closing prices in silver and gold posted above, the gold/silver ratio worked out to 91.2 to 1 on Friday…compared to 92.2 to 1 on Thursday.

And here’s Nick Laird’s 1-year Gold/Silver Ratio Chart, updated with this past week’s data and, as is always the case, Friday’s gold/silver ratio data point isn’t on it. Click to enlarge. 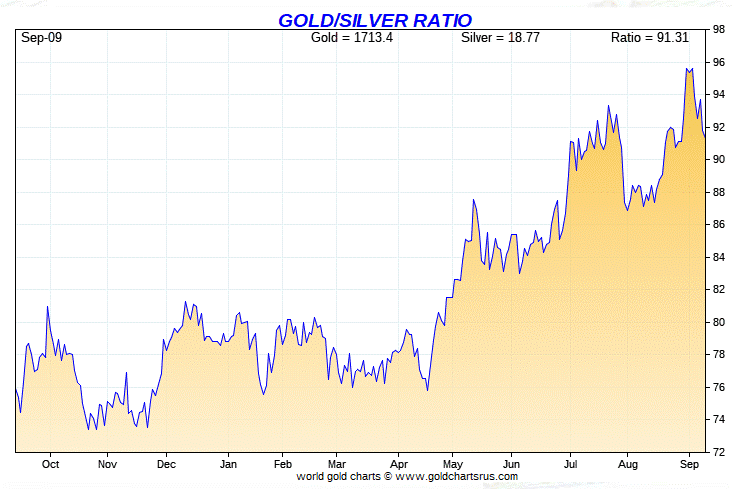 The dollar index closed very late on Thursday afternoon in New York at 109.71 — and then opened lower by 13 basis points once trading commenced at 7:34 p.m. EDT on Thursday evening, which was 7:34 a.m. China Standard Time on their Friday morning. From that point it wandered quietly lower until its low tick was set a 9:56 a.m. in London. It then rallied a bit until 1 p.m. BST/8 a.m. EDT — and from that juncture it chopped/wandered very quietly sideways to a bit lower until the market closed at 5:00 p.m. in New York.

The dollar index closed very late on Friday afternoon in New York at 108.97 — and down 73 basis points on the day, but 50 basis points points of its recorded low tick in London.

Here’s the DXY chart for Friday, thanks to Bloomberg, as I was able to log on without getting the usual message that I had to subscribe before I could look at anything. Click to enlarge. After signage loss, it’s time for majors parties to put up a noble fight in war of independents