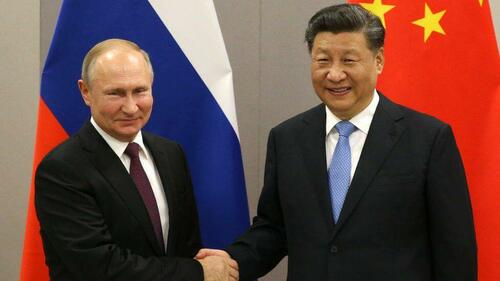 Authored by Bill Blain via MorningPorridge.com,

“Our glorious forces are advancing swiftly in a rearwards direction!”

Stock markets may be crashing on inflation fears, but watch the Putin Xi summit in Samarkand tomorrow as the critical event this week. Is China prepared to reinforce Putin’s failure – and what does that mean in terms of risk?

Yesterday was a dismal day across Global Markets. Worst stock market performance since 2020. A stronger than expected US inflation print has reawakened a host of fears. Across the Occidental West we are fixated on the market risks from the inflation battle, avoiding (or minimising) recession risks, austerity budgets, dollar strength and currency weakness, plus the trajectory of interest rates.

In the UK – where the new Truss Government’s first act was to sack the top Treasury official, but still hasn’t revealed any joined up-plan or numbers for its’ hyped energy cap bailout – the workings of the nation have ground to a halt as we approach Her Majesty’s funeral on Monday. (I managed to do a day’s work in London y’day – but government can’t?)

As usual, we might be watching and worrying about all the wrong things.

The critical event occurs tomorrow at the Shanghai Cooperation Organisation summit in Uzbekistan – where Putin and Chinese Premier Xi will meet.

What will the supplicant, Putin, ask of the Red Emperor?

Ukraine has proved anything but the 4-day triumphant procession into Kyiv we were led to expect. Putin failed a 21st Century repeat of easy Soviet wins in Hungry and Czechoslovakia. He utterly misjudged the mood and people of Ukraine. 8 months of brutal reverses later, Russia, the ultimate bully, has been punched and skewered where it hurts. 53,000 casualties (no official figures are available), massive equipment losses (the Ukraine now has more vehicles than before the war from the numbers they have captured), and swathes of Russia’s professional army units left ineffective.

If you don’t believe what the Western Press is writing about the battles round Kharkiv, try Aljazeera: “How are pro-Kremlin Russian Media portraying Ukraine’s victories?”

For all the Kremlin rhetorical BS about how it’s the west that is losing – Putin desperately needs help to avoid humiliation – and replacement with prejudice. Mass mobilisation may prove a circuit breaker. Russia needs support. Putin needs to minimise just how badly Russia is going to lose, and lose badly. Today, tomorrow or next year – defeat in Ukraine looks nailed on. Long term, the forces of Demographics, GDP and production all point to Russia being wiped from the significant threat board.  Check out this Porridge from August: “Why are we so scared of Putin and Russia?”

Therefore… the meeting tomorrow in Samarkand is critical for Putin to avoid the foundations of his kleptocracy and his personal fortune collapsing. Will XI help him out?

Difficult decision for the Red Emperor. The Middle Kingdom is unwilling to finance and reinforce failure. The calculus for Xi is what does he potentially gain from supporting Putin?

It’s in Xi’s interest for Europe to remain roiled by energy instability, the uncertainty of a Russian Mad Dog in the Kremlin, while dangling the threat to global supply chains of China invading Taiwan. Xi is not stupid. He knows doing nothing while apearing willing to do anything, is a winning tactic. Simply being seen to nod in a sympathetic and supportive manner to Putin tomorrow will likely convince the West a mighty Chino/Soviet steam-roller is set to crush us all.

Xi may throw in some desperately need high-tech supplies like Chips to further ferment the battle. Will he offer Russia the kind of war-winning HIMARs type support the West has given to Ukraine? Even if they exist, he won’t want to risk Chinese arms being discredited by an already beaten Red Army.

In what is a geopolitical Game of Go, Xi’s goal is to encircle and diminish the American threat. That can be done politically by encouraging US isolationism and breach with Europe. The West fears Xi will use the Mad Dog Putin opportunity to sort out the embarrassment of a Chinese province, Taiwan, wanting to be anything except part of China – by using the distractions of Ukraine and a new Western financial crisis to invade Taiwan. It would force the US into a costly, Fabian defence of the Island. Wargames suggest the US may win, but at the cost of hundreds of aircraft and its carrier groups. While defeat could destabilise China – it would also weaken the US across Asia/Pacific, maybe allowing China to fill any power vacuum – a lose to win attritional strategy. War in the South China seas won’t help Russia much, except turning Europe’s Energy Cold War into a Global Hot War.

Will Xi risk it?

Russia is losing the war. Xi’s position is not so secure he can further exhaust the Covid fearful, ailing Chinese economy ahead of his confirmation as Glorious Leader for the next 5 years later this year. He certainly can’t risk the People’s Liberation Army – which shares top-down tactical doctrines with the now utterly discredited Red Army – being exposed as an equally hollow sham.

China has the much feared hypersonic D-21 and D-26 Carrier killer missiles but the US has a highly trained and motivated navy on the other side of that potential bluff. If, and it’s a big if, the missile’s capabilities are hype, and they prove about as effective as all the Russian wonder weapons in Ukraine, then just why would Xi risk it being discovered?

Hypersonic missiles have the potential to be a fascinating game changer – the speed of a ballistic missile with the accuracy of a cruise weapon. They make slow strategic bombers obsolete. The Russians have squandered limited numbers to no real strategic effect in Ukraine. The Chinese have played up their use as a force defence shield if they invade. The American’s are scrabbling to develop their own – which I suspect will actually work, and demonstrate just how effective they could be at both strategic and tactical level.

Xi will carefully weigh the current opportunity. To strike while the West is distracted by Ukraine and a worsening economic situation is an enticing opportunity but raises all kinds of end-game risks. Doing nothing may precipitate regime change in Russia, pushing it back into closer alliance with Europe, therefore cutting off the cheap Energy Xi hopes to acquire as Russia’s partner, and the Siberian resources he needs to drive the Chinese economy.

The Chinese are a cautious patient people. Ultimately, I expect Xi will make some encouraging noises, assure Putin of his support, and then do the square root of diddley squat. He will let the moment pass – why poke the American hornet?

Putin knows this dance. He staked everything on Ukraine. Without clear China support, the mad-dog risk becomes unquantifiable. If Russian armies continue to run, don’t discount Vlad lobbying off some tactical nukes to avoid an outright strategic defeat in Ukraine. Don’t discount it happening. Idiots do stupid things. Cornered liars about to be exposed as absolute failures can be even stupider.

In the next few days and weeks we might get lucky and some globally minded Russian functionary stops Putin triggering World War 3. Or we might not.

Ukraine’s success across the Kharkiv region has clearly rocked Moscow. There are signs, albeit small signs, of rising internal dissent and dissatisfaction with the way the war has been run. For all the Russian trollbots attempting to shape the narrative; initially as a police action to put down a Nazi infestation, but now the brave and invincible Red Army fighting not Ukraine but the industrialised might of Nato – the reality is Putin’s Ukraine War has exposed Russia as a flaccid paper tiger, its intelligence services as hopelessly corrupt, and its Army as comically incompetent.

Russia’s one advantage – its energy blackmail of the West is looking less effective by the day as Gas prices fall, Europe prepares for a tough winter, and energy storage facilities look sufficient for an average winter. Europe can win, but has to hang tough – make it through the winter, and Russian’s energy grip is broken.

The military consensus is Russia has been beaten in the field – and that leads us to this incredibly dangerous moment – the cornered animal. Russia’s armies have been beaten. There is no prospect of resupply with modern weapons – because Russia lacks access to the multiple advanced chips to make a modern fighter jet or tank work. They are short of troops – and to impose conscription or the call out of the 5 mm strong reserve forces would make Putin look weaker, and what is he going to arm them with?

Ukraine is now fielding a 1 million strong army of increasingly well-armed, confident, motivated, and partially western-trained men and women. Its 4 light brigades have proved resilient and effective against thin crust Russian lines. It will need more equipment to win, unless the Russian’s crack first. In contrast, 5 million untrained Russian reservists armed with 1970’s scrap yard Soviet tanks, fighting an unpopular war on hostile soil as their domestic economy collapses, will literally bleed Russia dry, and could end up in a 1917 scenario – where Russian armies walked away from the battlefield and stirred the revolution. (Thanks to David Murrin for that observation.)

The brutal reality for Russia is simple. In two years Europe will be energy secure and free of Russia. Russia will become nothing but an economic adjunct to the Greater Chinese Co-Prosperity Sphere – and Russians won’t like it much as China pays them a fraction of global prices. That is the future Putin has doomed Russia to – accepting whatever price China is willing to drop in their begging cap for their resources and energy.

Ukraine may not be perfect, but it will be rebuilt in terms of political and economic infrastructure.

Fake meat grown in labs might make investors rich, but it’s a nightmare for human health