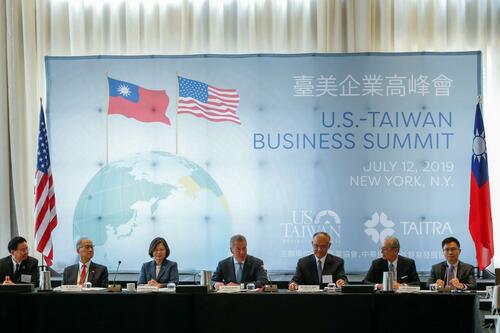 The US is considering a package of sanctions on China to deter Beijing from invading Taiwan, Reuters reported on Tuesday, citing sources familiar with the discussions.

The sources said that the discussions on the sanctions were in their early stages and didn’t detail possible measures Washington could impose. But they would have to go beyond the sanctions the US has already implemented on China in recent years. The report also said that Taiwan has been lobbying the EU to take similar action.

It’s not clear from the report if the US would impose the sanctions before any Chinese attack on Taiwan or if the threat of the sanctions package is meant to be a deterrent.

The report comes as the sanctions imposed on Russia after the Ukraine invasion are largely backfiring on the West as the US and Europe are facing soaring energy prices and Moscow is profiting more from oil sales than before the war.

The US economy is much more intertwined with China than Russia, so any major sanctions against Beijing would likely hurt the US more than the measures targeting Moscow, as one former top Commerce pointed out:

“The potential imposition of sanctions on China is a far more complex exercise than sanctions on Russia, given U.S. and allies’ extensive entanglement with the Chinese economy,” said Nazak Nikakhtar, a former senior U.S. Commerce Department official.

The Reuters report said that the sanctions were being considered after China launched its largest-ever military drills around Taiwan in response to House Speaker Nancy Pelosi (D-CA) visiting the island. Beijing made clear it would have a significant response to Pelosi’s trip, but it didn’t stop her from going.

China has kept up the military pressure on Taiwan as US officials continue to visit the island. Since Pelosi made her trip in early August, five more US delegations have traveled to Taipei.